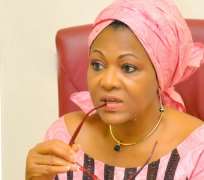 Delivering judgement in Owerri Monday the Presiding Judge, Justice Edemekong Edemekong struck out the case on the ground that it lacks merit and was time bound.

The ruling was delivered on the application brought forward by first the respondent, Senator Anyanwu to the effect that the 180 days allowed by the constitution of the Federal Republic of Nigeria 1999 as amended, for election petitions has expired. Her team of lawyers led by Barrister Bon Nwakanma (SAN) urged the tribunal to strike out the case.

The petitioner however contended that the period has not expired since 57 out of 180 days were used to argue the petition in the Court of Appeal Owerri and as such should be discounted from the 180 days, to give life to the petition.

The tribunal, relying on the recent decisions of the Supreme Court in a Borno State electoral matter between Governor Alhaji Kashim Shettima and challenger Mohammed Goni, all delivered on 31st of October 2011, held that deadline prescribed in the constitution is absolute and cannot be changed. Therefore, the judge struck out the petition and said the tribunal has no jurisdiction on the matter.

In her reaction, Senator Chris Anyanwu described the judgement as a revalidation of the people’s mandate to her.