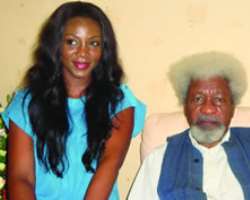 Soyinka with Genevieve
It was an invasion that will not be forgotten in a hurry. The street of Nairobi, capital city of Kenya, was literally taken over by Nigerian movie stars, who had come in droves to showcase the magic of Nollywood. Even a Kenyan tabloid had reported the Nollywood 'invasion' with a banner headline: 'The Nigerians Are Here' thus giving credence to the impact of the Nollywood Road Show, which not only had top Nollywood stars and Professor Wole Soyinka in attendance, but also showcased some of the best movies from Nigeria in recent times.

Star actress, Genevieve Nnaji, excited her Kenyan fans who had waited patiently for her arrival at the Regency Cinema, Nairobi where Professor Wole Soyinka was sharing his experiences on African Films and Literature with a large crowd of university teachers, students and filmmakers. And so was Tina Mba, Ramsey Nouah and Kunle Afolayan, who were stars of 'Tango with Me' and 'Figurine' respectively. Both movies had won the selection of the National Film and Video Censors Board (NFVCB), which had organised the Road Show as a strategic marketing window for Nigeria. Of course, the Road Show is a part of the Censors Board's 'Nigeria in the Movie' (NIM) project, which Emeka Mba, Director General says is geared towards redefining the identity, influence, character, and image of the country.

Hear him: 'The international road show is therefore premised on creating further investment opportunities for the movie sector through the synergy that may arise from a network created by participating and promoting Nigeria at the KIFF.'

The involvement of Soyinka, the pride of the black race and the only African Nobel Laureate, had created the bond expected of the African cinema rather than the competition associated with the seeming dominance of Nollywood movies. The professor, who shared the podium with KIFF's Festival Director, Charles Akiba, noted among other issues, the need for Africa to synergise as a film industry, same way that efforts are ongoing to create a caucus of African literature.

'There is the need to get businessmen to teach the filmmakers how to market their wealth. I have been on the film jury since the '60s and I know that Africa has a long history of filmmaking,' Soyinka declares.

Prof. Soyinka, who also gave reason some of his books have not been adapted into movies, said he is disposed to filmmakers who may be willing to do so in as much as they have a good understanding of Africaness that his themes deal with. He noted that one of the reasons the movie on one of his books; Kongi's Harvest was not successful was because the filmmaker, an African-American, did not understand well enough the African setting, culture, and mythology.

The screening of Mahmood Ali-Balogun's 'Tango with Me' and Kunle Afolayan's 'Figurine' gave the Kenyan crowd an alternative taste of Nigerian films outside of the themes of voodoo and witchcraft they are familiar with. The event was also attended by the Nigerian High Commissioner to Kenya, Dr. Chijioke Wigwe and Mr. Desmond Ojako, Managing Editor, Film Business magazine, who was moderator of the interactive session with Prof. Soyinka.

Fun continued at the Carnivore, a popular Kenyan joint noted for assorted barbeque, sausages, and local delicacies. Hip hop sensation, Ice Prince of the Chocolate City Group performed some of his hits amid wining and dining with a larger Nigerian community and their friends in Kenya.