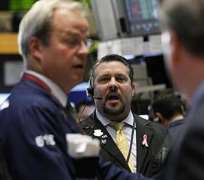 Stocks slid more than 2 percent on Wednesday as a spike in Italian bond yields heightened fears the debt crisis in Europe was spreading.

The selloff hit all 10 S&P sectors, with financials off 3.4 percent as investors dumped bank stocks on concerns about their exposure to European debt. The KBW Bank index fell 3.8 percent.

"The market is finally having a wake-up call. We've been too optimistic to really accept what's going on," said Seth Setrakian, co-head of U.S. equities at First New York Securities in New York. "We now realize that it is not going to be smooth sailing."

Italian bond yields shot up to 7.502 percent, a new high since the euro was introduced in 1999, as investors unloaded the debt after a clearing house increased margin calls. Prime Minister Silvio Berlusconi's insistence on elections instead of an interim government raised concerns of prolonged instability and delays to economic reform.

Italy has replaced Greece at the center of the euro zone debt crisis and is seen teetering on the cusp of requiring a bailout. Portugal and Ireland were forced to seek bailouts when their borrowing costs reached similar levels.

Reflecting growing market anxiety, the CBOE Volatility Index VIX jumped 16 percent. The index usually moves inversely to the S&P 500 as traders use it as a hedge against a further market fall.

"Italian bonds are essentially serving as another fear index like the VIX, and right now they're reflecting a lot of fear," said Charles Reinhard, deputy chief investment officer at Morgan Stanley Smith Barney in New York.

General Motors Co slid 8.3 percent to $22.96 after the automaker said it would not break even for the year in Europe, as it had forecast, due to deteriorating conditions in the region.