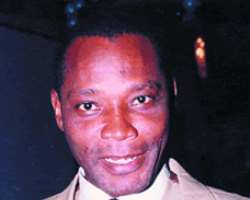 Norbert Young is a household name in Nigeria. Television viewers will not forget his performance in the now rested soap opera, Checkmate, where he played the role of a university teacher. In that television series, he exposed some of the bad things lecturers do and he was good playing the role.

A core professional, Young said that the country would get more mileage if the government would use Nigerian movies, which, according to him, is a veritable vehicle for promotion, to drive the rebranding project.

The actor said: “Nollywood does not exist in terms of the fact that it is not a place. It is a concept. Unlike Hollywood, which is a city, Nollywood is not a city. It is a concept. Whether it is good or not, it exists. It has been there and like any other industry, it has offered people work. A lot of people have been employed; so the point as to whether or not Nollywood is there is irrelevant. It is there. A lot of people have benefited from it and people are still benefiting from it.

“Its professionalism or otherwise is not the issue. For me, I have always said that it is not professional, in terms of the fact that the practitioners have refused to go for training. You make it an all-comers affair. That has always been my problem with them, especially, when it comes to acting.”
Young however, said that Nollywood has to do more, in terms of acting. Without equivocation, he said: “Their acting is so terrible and just kindergarten-like, but it could be better. It is just that they have refused to apply themselves so as to be better.”

He revealed that his desire to see a Nollywood with high standard made him to always talk about professionalism. He said: “I have always emphasized the importance of professional training for Nigerian actors. If you watch Nollywood films, there is only one way of doing it. There is nothing like characterization, for instance. It is only a few of the movies that you could actually find a little of characterization, but most often than not, what you see is always a repeat of same people from one film to the other. They play the same thing. The only difference is that the actors take different names.
“Since Nollywood was established, I have often said that people should go for professional training. You see, most Nigerians think that you don't need to learn anything. You can just do anything without training. I guess that's one of the reasons we are where we are. I have often emphasized this. They know and this stance has pitted me against them.”

He said that in an industry, where professionalism is brought to bear, actors do things according to laid down standards. He lamented that the country's actors and actresses some time want their will to be done because they are not professionals.
Young said: “It is so bad that there have been cases where actors insist on wearing what they want. They choose and insist on the kind of costume they want. So, that is the cause of lack of professionalism. If you want to do a production, as a director, you must have a production concept. Your production must have a design. Everything that would support the design must fall in line. But you know, the kind of actors we have would insist on doing their own make-ups. They insist on what they want, insist on the clothes to wear and it is allowed.

“But in other settings, you cannot dream of doing that, let alone doing it. They are so many other flaws that you can talk about, but what I am particular about is the acting. It is appalling. However, there has been a little bit of improvement in certain areas. There are still shortfalls in the costuming, make-up and the rest. But even then, there are improvements. For instance, there is character costume and ordinary costume. I doubt if many would know this in the industry.”

Explaining the technicalities of film production, he said there is need to depict situations with the setting and dressing. He lamented that some of these are missing in the country's film industry.
“Again, you see, part of this is the problem of professionalism. Some scenes are supposed to have moods that will suit the theme of the movie. In a sober mood, like mourning mood, for instance, if you have to come to that place gorgeously dressed, it must be for an effect. This must be part of the plot, but if you come to the place dressed gorgeously and every other person is dressed in mourning cloths, then it spoils the mood because instead of enhancing the plot, it would diminish it.

Our actors, especially the actresses, choose what they wear. It is not their business what the production design is,” he said.
On the glorification of crime in home video, he said: “Well, I will answer it this way. First, what is the motivation for doing a movie? It is for fun? Is it to teach or show the way forward? You see, America makes a lot of films on crime but you forget again, to mention that at the end of the day, the criminal is always brought to justice. It looks like our people embellish crime. In cinematography, you have an objective so that when it falls, it will be a big fall and it will make an impact. Now, what is your motive? They think about making money from negative crime plots and forget about communal development, developing the society. I think we should be looking for films to help us develop society.

Take the film, Air force One, for example. For me, that is a great film. If you show it to the American President, he will see it as good act because it will tell the President, CIA and everybody that nobody is safe, as they think. Somebody just sat down and put it together. We can do films like that, not necessarily about the president but about something that would develop our country. I have not seen any movie on safety. Neither have I seen any on safety in industries or factories and the rest. Those things are good and can sell too. And most of these crime-based movies are not crimes being committed in Nigeria. So, I don't know what their motivation really is.”

Young said that the good side of culture should be played up in films instead of always showing the negatives. According to him, “a situation where some one is unjustly accused of something and she simply cries away without putting up any form of defence does not make sense. He doesn't even make any attempt to defend himself. Things are not done that way. We do not live like that. For me, that is a very lazy and cheap way of telling a story. You could do it better.”

The actor was not disappointed about Nigeria's performance at the last AMAA awards. He said that more entries came from other parts of Africa, emphasizing: “I don't even know if they shot on video or celluloid; I mean the other African countries. Well, if you shoot on celluloid, you can't compare the quality with video. So maybe, that's what the Kenyans did. And whoever does that is a professional. He is not a roadside actor or a roadside cameraman or a roadside director. You dare not go to celluloid if you are not a professional. You can't try it.

“If they won all these awards, first of all, I think the scope was broader, maybe more entries came in and then, the judges may have found the quality of works from other countries better than ours. In whatever way, I think that was responsible for it. In any case, it doesn't mean that Nigerians must only win. Maybe, they had better productions. It is even good they chose Funke for Best Actress. Maybe, they did not judge the technical aspect, but her acting. I think it is good that she won.”

What does Young think about the rebranding project? His reaction is simply: “What are we re-branding?” he said the government should do more than just image laundering. According to him, “the outside world knows that you are not doing anything. See the money being spent on text messages of “Nigeria, great country, good people.” It is a lot of money that could be put into infrastructure. But suppose we put part of the resources into making electricity work? Won't we be better for it? Let us know what we are re-branding. Let us see that things are changing and then, we are realigning or re-orientating ourselves in that direction.

“It is a good idea to put it in the psyche of Nigerians to be patriotic. Let us work together and make it well, but we should get infrastructure right. There are no good roads, no electricity; nothing. So what are we selling? The little knowledge, I have had about advertising is that when rebranding, it means that you have improved the brand. You are now relaunching it into the market. So you put forward the unique selling points. But what are we putting forward? What are we re-branding? Are we re-branding no electricity, water or good roads?”

Hw however said that if the rebranding concept is sellable movies should be employed to make it happen. “Movies have a role to play. Movies are the vehicles with which you can convey it to people on a wide spectrum, on a broadcast level. Movies have a big role to play,” he said.
The actor would want the government to do something to boost the movie industry. He however, says that it is not government business to produce movies but that programme could be enhanced with movies.

He said: “Government can say, for example, in this re-branding, can you package this film in this direction? Government can call producers and get actors to do something for it. People will reap the benefit of their works. That's what I think government can to. The census board is supposed to be a regulatory body to censor, but what I don't agree with is the selective censorship. What they should do is to classify movies accordingly. But sometimes, I hear that censor's board expunge certain things from movies. It is supposed to be a regulatory body. They should work within the confine of what should be done to improve acting.”

Young said that he is helping the movie industry with his training school and workshops he regularly runs.
He said: I teach acting. I teach people everything. It is Body, Voice and All. I have a stage for stage acting. All materials are available for those who are interested in acting. We do both theoretical and practical aspects of acting. It is like what I did for AMBO house in 2007. I taught them the rudiments of acting. It is the kind of contribution I 'd like to make to the industry. It is a noble thing to be in the arts. I enjoy it and I enjoy teaching people. Anybody who is interested in learning acting should come to our school.”