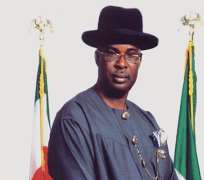 THEWILL had previously reported that the party would make the recommendations of the National Working Committee (NWC) public today after a meeting with President Goodluck Jonathan, who forced members of the powerful committee to bar his kinsman Sylva from returning as governor of the oil-rich state, following their political differences.

A statement by the National Publicity Secretary of the PDP, Professor Rufus Alkali announced Sylva’s fate. Alkali said, "After a thorough review of the reports of the Screening Panel and the Screening Appeal Panel, the leadership of the Party has so far cleared the first batch of contestants for the Governorship Primaries in Bayelsa State. They are Oruta Justine Boloubo Henry Seriake Dickson, Enai Christopher Fullpower, and Kalango Michael Youppele.”

But Sylva insists that he has not been disqualified, adding, “there there is no basis for my disqualification.” He added that “there is a desperate attempt by certain forces to illegally exclude me from seeking re-election as Governor of Bayelsa State on the platform of the PDP.”

The full text of Alkali’s statement reads, "The National Working Committee of the Peoples Democratic Party held an emergency meeting on the 31st of October, 2011, and considered reports on the preparations for the forth coming Governorship Primaries in Bayelsa State.

"It also received the report of the Screening Appeal Panel headed by Her Excellency Abiodun Olujimi, Former Deputy Governor of Ekiti State.

"After a thorough review of the reports of the Screening Panel and the Screening Appeal Panel, the leadership of the Party has so far cleared the first batch of contestants for the Governorship Primaries in Bayelsa State. They are Oruta Justine Boloubo Henry Seriake Dickson, Enai Christopher Fullpower, and Kalango Michael Youppele.

"The NWC session to conclude the review exercise continues in order to consider cases of other aspirants on their individual merits.

"All party members, particularly stakeholders in Bayelsa State are to please note that the NWC is handling this exercise painstakingly and shall communicate all its decisions in due course.

"Party members are therefore advised to await the decisions of the NWC on this issue and mobilise all our supporters for the success of the forthcoming primaries," Rufai stated.

However, in his reaction to his exclusion from the PDP governorship primary, Sylva in a statement said, “In the past few days, I have read all manner of reports in the media concerning our Bayelsa State, our Peoples Democratic party (PDP), and myself. Specifically, there have been reports that I have been disqualified or going to be disqualified by my party. These reports are unfounded, laughable, but disturbing. I have not been disqualified. And there is no basis for my disqualification.

“What is clear to me, my supporters, and indeed all lovers of democracy in our dear country Nigeria, is that there is a desperate attempt by certain forces to illegally exclude me from seeking re-election as Governor of Bayelsa State on the platform of the PDP.

“On Thursday, 27 October, I appeared before the PDP Gubernatorial Screening Committee for Bayelsa State at our Zonal Secretariat in Port Harcourt. My encounter with the committee was warm and friendly. Consequently, I was issued with a Provisional Clearance Certificate with Serial number 0000012 dated 28 October 2011.

“On Sunday, 30 October, I appeared before the Gubernatorial Screening Appeals Committee in Abuja at its invitation. Again, there was nothing to worry about. The committee merely asked me to explain a few issues based on complaints they had received from certain interested quarters. Reports reaching me state without equivocation that this committee also upheld my clearance to contest the PDP Primaries slated for 19 November.

“As I speak, no organ of the party has informed me of anything to the contrary.

“I am in touch with the national leadership of our great party, including Mr. President. I have received solid assurances at the highest levels that the party would base all its actions concerning the Bayelsa Gubernatorial primaries on law. I am happy about that. As a sitting governor, I expect protection from my party and all its organs as all sorts of machinations can be plotted against me.

“The decision to seek re-election is not personal. It was the collective decision of our people for a leadership that will consolidate the gains of the past four years. The battle is not about me. It is about Bayelsa State. And it is about the PDP. My overarching goal since assuming office four years ago has been to build a great Bayelsa State in which all Bayelsans – and indeed Nigerians – would be proud of,” the embattled governor wrote.

Meanwhile, Sylva has launched a last minute move to ensure he returns as governor of Bayelsa on the platform of the Peoples Democratic Party (PDP). He has reached out to the powerful Nigeria Governors’ Forum (NGF) to help appeal to President Jonathan and the NWC to approve his candidacy for the November 19, 2011, Bayelsa PDP Governorship primary.

THEWILL understands that some Governors in the forum from the South-South zone have indeed conferred with Jonathan in a bid to save Sylva.

It is however unclear whether the Rt. Honourable Chibuike Rotimi led NGF can save him from being humiliated by President Jonathan.

THEWILL investigations revealed that Sylva is arrogant, boastful and very disrespectful. His arrogance led to his fallout with his political godfather and mentor, the former Senior Special Adviser on Petroleum and Energy to former President Obasanjo, Dr Edward Dakoru, who installed him as Governor of Bayelsa.

Sylva is also known to be frequently high on banned substances (his preferred is cocaine). It is suspected that he was under the influence of the narcotic, when he placed a controversial phone call to a relative of the President where he threatened to kill Jonathan and make Bayelsa State ungovernable if he moved against his return as governor.

The alleged phone call was what cracked the ice on his fragile relationship with Jonathan, who swiftly ordered the dismantling of Sylva’s political structure in Bayelsa, where the first casualty was State Party Chairman and Sylva-stooge, Chief Dairus Obiene.