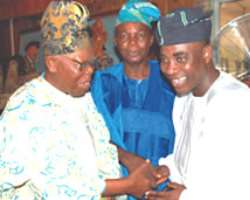 K1 de Ultimate Ayinde Marshal has been named the first Mayegun of Yorubaland by the highly revered monarch and foremost traditional ruler, Oba Lamidi Adeyemi, the Alaafin of Oyo.

The announcement came in Oyo on Wednesday when the popular musician visited the monarch with his friend, family and fans for the iweri (traditional rite for would-be chiefs).

Although, no date has been fixed for the final investiture of the chieftaincy title but K1 assured that it will be very soon.

K1 is seeminly the most successful Fuji artiste in the country and his fans cut across every divide.

Pasuma Alabi, Taiye Currency and some other musicians were in attendance to rally support for the Fuji king.