Man City Look To Streak Clear With Another Win 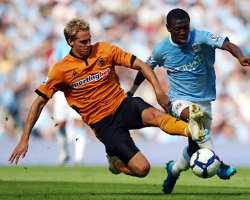 Manchester City can open up an eight-point gap at the top of the Premier League when they return home to what will be a heroes' welcome in front of almost 50,000 adoring fans for the visit of Wolverhampton Wanderers on Saturday.

City, who crushed Manchester United 6-1 at Old Trafford last week to move five points clear at the top, will be meeting Wolves for the second time in four days after their 5-2 win in the League Cup on Wednesday at Molineux.

On current form, Wolves will be no match for City, but their manager Mick McCarthy, who made 140 League appearances for City in the mid-1980s, will relish another tussle against his former club, who only won the corresponding League fixture 4-3 last season.

Meanwhile, United, humbled by their defeat at Old Trafford which manager Alex Ferguson called "the worst day in my history", make the short, tricky trip to Everton who lost 2-1 at home to Chelsea in the League Cup on Wednesday.

United, with Ferguson making 11 changes to the side beaten by City, did at least taste some success this week with a 3-0 win at League Two (fourth tier) Aldershot Town in the League Cup.

There is no doubt who has the harder task on Saturday because if United should slip up at Goodison in their 1100 GMT kickoff, City will kickoff at 1400 GMT knowing they can streak ahead of them in the title race with a win over Wolves.

McCarthy's side narrowly avoided a sixth successive league defeat on Saturday with two late goals in a 2-2 draw with Swansea City and after being booed by home fans for the way his team were playing, dismissed them as "mindless idiots" on Wednesday.

They might not be too kind to him again after that remark with another defeat.

TEVEZ DISPUTE
The only blot on City's copybook at the moment is the ongoing spat between Argentine striker Carlos Tevez and manager Roberto Mancini with Tevez considering his options after City fined him four weeks' wages totalling nearly 1.0 million pounds on Tuesday.

The penalty follows the incident when, for whatever reasons, he did not come on as a substitute in the Champions League match at Bayern Munich a month ago when Mancini ordered him to do so.

Although the Tevez dispute might be energy-sapping off the pitch, Mancini appears to have little to worry about on it with City winning eight of their nine matches and drawing the other, scoring 33 goals and conceding just seven.

While City will be hoping United slip up again, so will Chelsea who can go above Alex Ferguson's men if they beat Arsenal in what is always a fiercely contested London derby at Stamford Bridge.

Chelsea, however, have enough problems of their own to worry about but will at least have Spanish striker Fernando Torres back in their side following the end of a three-match suspension and will be heartened by the Cup win at Everton.

Chelsea will want to regain their momentum in the League immediately after last week's London derby defeat at Queens Park Rangers when they had Jose Bosingwa and Didier Drogba sent off and lost 1-0.

The match has remained in the headlines for unpleasant reasons all week, however, with skipper John Terry denying racially abusing QPR's Anton Ferdinand, during the match but the allegations are being considered by the FA and the police.

Chelsea's talkative manager Andre Villas-Boas is also in trouble for comments he made about the referee after the game.

Arsenal, for once this season, go into a match in a relatively stress-free state of mind following last week's 3-1 home win over Stoke in the League and their 2-1 win against Bolton Wanderers in the League Cup on Tuesday.

With just under a quarter of the season completed, Chelsea are tucked in third place on 19 points, behind Manchester United (20) and Manchester City (25) while Arsenal are beginning to accumulate points after their poor start and are up to seventh with 13.

Newcastle United, who along with City are the only other unbeaten side in the league after nine games, are fourth on 19 and travel to Stoke City on Monday.

Fifth-placed Tottenham Hotspur, who have 16 points from eight games, face QPR at White Hart Lane on Sunday, seeking to sustain their good run of five wins from their last six games.

At the other end of the table, the non-stop pressure on Blackburn Rovers manager Steve Kean will doubtless increase if his side lose to Norwich City, though a battling 4-3 Cup win over Newcastle on Wednesday will have raised spirits.

Wigan Athletic, in 19th, will be looking to avoid a seventh straight league defeat against a Fulham side who are just two points and two places above them.