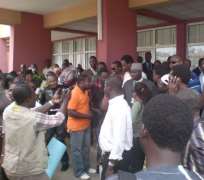 THE Coalition of Nigeria Artists rose from their extra-ordinary meeting on August 3, 2009, where they deliberated on the recent developments in the culture sector. In a communique issued at the end of the meeting, certain far-reaching decisions were made regarding the arraignment of the directors-general of the Nigerian Film Corporation, Mr. Afolabi Adesanya and his counterpart at the National Gallery of Art, Mr. Joe Musa.

Those in attendance include the heads and members of Associations and Guilds in the Culture/Information Sectors under the aegis of the Coalition of Nigerian Artist(e)s. they arrived at firm resolutions on the way forward for the Ministry of Tourism, Culture and Tourism and National Orientation and the Ministry of Information and Communication.

They made the following affirmation: "That the recent happenings that have pervaded the Culture/Information Sectors including various EFCC's arraignments of CEO's and Directors of parastatals in the Federal Ministry of Culture, Tourism & National Orientation and that of Information & Communication namely Mr. Afolabi Adesanya, Managing Director of the Nigerian Film Corporation and Chief Joe Musa, Director-General of the National Gallery of Art and four Directors are worrisome;

"That while the cases are still in court, all Associations and Heads in the Culture/Information Sectors under the aegis of the Coalition of Nigerian Artist(e)s hereby demand for fair trials to avoid any form of prejudicial treatment or postulations. And that the current observed posturing of certain Board members and Civil Servants to take over administration of the parastatals or agencies, whose heads are under investigation and trial should be HALTED.

"All accused CEO's and Directors are all presumed innocent until proven guilty. We believe and trust in the sanctity of the judiciary and trust that it will deliver a fair and just judgment.

"That with the recent development, we hereby express our fear that the current onslaught against the headship of the National Gallery of Art and the National Theatre/National Troupe of Nigeria is a pre-conceived strategy towards destroying the relative successes recorded by these parastatals in recent times. We also fear that the next target may be the Centre for Black and African Arts and Civilization. As major players in both the Sectors and the Industries, we hereby warn all players in this diabolical game of systemic destruction of our cultural legacies and edifice to desist or face the wrath of the members of the Art and Culture Community.

"That henceforth all parastatals in the Ministry of Culture & Tourism as well as Information and National Orientation must make public publication of their account records (expenditures and expenses) for the purposes of probity and accountability.

"That the political head of the Ministry of Culture, Tourism and National Orientation should desist from frivolous demands from the subventions allocated to various parastatals in the Ministry as his actions are capable of crippling activities and infrastructures of the Ministry. The Honourable Minister must stop being insensitive to the goals and aspirations of practitioners in the industry. The good and development of the sector must not be sacrificed on the altar of anybody's aspiration or political ambition.

"That the Coalition is henceforth interested in, and prepared to be involved in the appointment of the Minister of Culture, Tourism and National Orientation, as well as the Minister of Information and National Orientation. Also appointments into the key posts in the parastatals under the two Ministries are now of utmost interest to the Coalition. Only qualified professionals must head these Ministries henceforth.

"That the Federal Government should know that the idea of appointing non-professionals into key positions in the Culture, Tourism and National Orientation/Information and Communication Ministries is hereby rejected and will be resisted henceforth.

"That in view of the need to set the Culture/Information Ministries on a pedestal of progress and stability, the Coalition hereby demands from the Federal Government that the issue of Arts Charter and National Cultural Policy be addressed for immediate review and implementation".