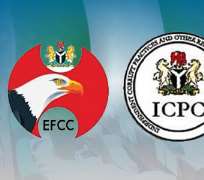 * Approves Ariwoola As Supreme Court Judge
ABUJA, October 19, (THEWILL) – The Senate has again blocked a bill that seeks to merge the Economic and Financial Crimes Commission (EFCC) and the Independent Corrupt Practices and Other Related Offences, (ICPC).

The bill, which was hurriedly withdrawn Wednesday by its sponsor, was preceded by overwhelming resentment to its content by majority of senators.

Also, the Senate today confirmed Honorable Justice Olukayode Ariwoola as a Justice of the Supreme Court of Nigeria following the debate on the report of the Senator Umaru Dahiru-led Committee on Judiciary, Human Rights and Legal Matters.

The bill for the merger of both anti-graft agencies was presented for second reading by Senator Ita Solomon Enang, despite its failure to scale through on October 4 at the floor of the upper chamber. He had earlier been advised by the Senate President, Senator David Mark to “withdraw it, update it and bring it back.”

But on his second attempt however, he was forced to withdraw the bill after seemingly negative reactions from other senators. His decision to withdraw the bill was in apparent fear that if the bill is defeated on the floor of Senate it may not be represented for debate until after six months.

Senator Enang had however argued that; “The functions conferred on ICPC are inadvertently conferred on EFCC too.

He argued the EFCC act gives the commission an omnibus jurisdiction over corruption cases and renders the ICPC ineffective.

In backing down, Enang who is the Chairman of Senate Committee on Rules and Business promised to reintroduce the bill in future after further legislative consultation with his colleagues.

The Minister of Justice Mohammed Bello Adoke had championed the cause for the merger of both agencies, saying both agencies have similar functions.

Speaking against the bill, however, Senator Galaudu Isa Mohammed said in his arguments against the bill that duplicity of functions was not enough to proscribe ICPC. He described the bill as "short cut" to the fight against corruption which would do more harm than good in the longer term.

"China has 18 agencies fighting, the United Kingdom has five so our two is not too much," even as he said if the agencies had problems it should be fixed and not merged. He also blamed the poor justice criminal system in the country for the problem adding, “The justice system is as slow as it is cumbersome.”

In same vein, the Senate passed for second reading a bill to provide for the prevention, control, management of sickle cell diseases and for other purposes.

The bill according to the sponsor, Sen. Ifeanyi Okowa, said the “objective of the bill is to address the creation of an optimal medical assistance programme for individual with sickle cell anemia, initiative awareness and advocacy programmes including genetic testing and counseling with the overall objective to reduce the burden of the disease in Nigeria.”

On the confirmation of the Honorable Justice Olukayode Ariwoola as a Justice of the Supreme Court of Nigeria, the Deputy Senate President Ike Ekweremadu while presiding noted that the confirmation satisfies Section 231 sub-section 3 of the constitution and expressed optimism that Justice Ariwoola possesses the mental capacity and attitude to excel in his new appointment.

The confirmation will bring the number of Supreme Court Justices in the country to sixteen, three from each zone of the federation except the North-East and South-South with two each.