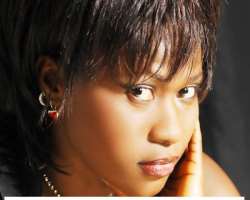 Uche Jumbo is one of the talents brightening up the Nigerian screen. In her many movies, she has displayed her acting skills. Recently, she was... chosen by Glo as one of their brand ambassadors. In a chat with MIRIAM Chidinma Okonkwo, she speaks about her acting career, and why she is yet to marry.

How are you enjoying your profession as an actress?

It was actually by accident. I was in the right place at the right time. I stepped into Fidelis Duker's office to drop a letter from the organisers of Reel Awards because I was part of the marketing committee. At that time Fidelis Duker was about to take off on a soap opera production titled Images, which he later turned into a home video. He was editing that day I went to his office. As I just walked into his office, he pushed a script to me and asked me to read for him. I said, 'No, I'm here to give you a letter' and he said “You can't act?” and I said yes, I can act. He said 'That's what everybody says' that I can act'. So I assured him I can act. He then asked me how I know I can act, whether I had acted on a script before. I told him of how three years of my secondary school was paid for by acting scholarship, then he got interested and he asked further. I explained to him that in United Church of Christ where I belonged, we had this drama group called “Children of God” which is meant for children in their teenage troubling years. During my teenage years, I was a total tomboy, so to keep me off the streets, off climbing trees and playing football with the boys, my mother had to register me in that drama group. So after school hours, instead of me going to play football, I go to church to act. In the drama group, the best student in drama is given a scholarship for one year making it something to look forward to. I grew up in Aba but I was born in Enugu.So, I won that in a row, 3 years. Fidelis was shocked and my career in the movies had started. That was my very first time acting on script, he later turned it into a movie called Visa To Hell. Some how, Adure, another movie came out before it.

What will you say is a laudable achievement you have made out of your professions?

Many see you as a pretty actress, do you have any beauty tips?

When I' m not working I rather not wear make-up because I wear too much make-up when I'm working. So when I 'm not on screen, I let my face breath. And I don't sleep with make-up no matter how tired I am. Even if I 'm out all night, I must wash out my make-up before I sleep. I think that's my beauty routine.

You also write scripts, when writing scripts what are your do's and don'ts

I try to make it as humanly realistic as it can be possibly be. I try to make my characters real. I try to make them talk like real people not a script. So I basically draw inspiration from people around, experience and all that. I'm currently working on a Zimbabwean script. Sometimes my script, stories have been told to me by someone else. But basically, I don't do the script hunting thing because I have two jobs and trust me, it's a lot. So I take my time especially when writing scripts because I don't write like regular Nollywood writers. I could write only once a year or two scripts a year, so I take my time. I don't go out on my own to look for script or a story. If it comes it comes.

That means that you are selective of roles you play?

I think in every career it gets to a point that you tell yourself you have to be able to control the movies you feature in, because people don't know where to draw the line from acting and your life. So it gets to a point in your career, and in any artist's career that you say, 'Okay, I think I have done too many similar roles, I think I need to balance it with other roles in order not to be a typecast'. And I don't think that's being selective. But it is repositioning.

People say you drink excess alcohol. Is it true?

What does that mean? That was junk journalism by a junk publication? You are here, this is my tea and I am writing. You are seeing me for who I am. I don't actually think that is something I will talk about or defend. In fact recently somebody told me that I smoke and I've never smoked for once in my life. So I think these days I think the more you are growing in the industry, the more you start hearing stupid stories that are very annoying. And you have to train yourself not to react to every story.

How would you describe Uche Jombo?

Have you ever been intimidated by any of your colleagues in the industry?

It happened, I think once or twice when I was starting off the. Trust me that was ten years ago That's a long time ago so I might not even be able to remember the exact details. But I think it happens to everyone usually at the starting point.

What makes you tick?

Believing in myself and telling myself that I can do it. When people talk to me and say they want to be an actor or actress, that they want to be just like me, I always tell them to start by believing in themselves. If I did not believe in myself, I would have long ago left the industry to look for work because I can't imagine how many times they had family meetings on me just because I live by acting.It got to a time that I felt may be this profession is not for me. But knowing well that this is what I'm supposed to do for life, I was strongly convinced and stood by what I believe in. That is why I said you must start by first believing in yourself and everything will definitely fall in place.I'm not saying that there will not be doubts, there will definitely come a time when discouragement will set in. Sometimes you will lock up yourself and cry, you even ask yourself sometimes if you're threading the wrong path, but having that confidence in yourself is what keeps you going at such trying times.

Not really, I wear what suits me, if it happens to be labelled, so be it.

Being a star, what are those things you used to do that you're not able to do anymore?

There are lots now. Part of the things you give up as a celebrity is that your life is no longer yours. Everything you do is under scrutiny, you have to defend everything you do.When you do something, which is not as if it's totally bad, people will definitely talk as long as you're a celebrity.

Have you ever regretted being an actress?

Only once in a while. It doesn't last more than five minutes. Actually when you hear things about yourself that are useless and you begin to ask where did that story come from? And you begin to ask people's right to your life. You begin to ask why everything that you do or might not do will be under scripting, then you remember I chose this life.

Is marriage bell ringing at corner?

No it's not. When will I have an interview without this marriage question popping up. Seriously, Iam not always amused when asked that question. Well, it will happen when it will happen. Only God knows when that is.