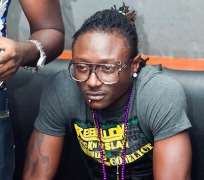 Terry had just finished performing at a show in the capital City of Cross River state and was heading out of the event when he was cornered by the armed men. They ripped him off his phone (Blackberry), Jewelry and money, our source informed.

The singer's manager named Ozone confirmed the incident to us and revealed the Akpako master sustained a minor injury after the robbers broke a bottle on his head.

"He was attacked on his way from an event in Calabar on Sunday night. He sustained just a minor injury on his head 'cos they broke a bottle on his head,” Ozone tells us.

Amayi is been taken care of at an undisclosed hospital in Calabar and due back in Lagos tomorrow Wednesday Oct. 12 2011