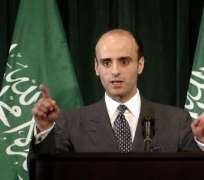 Saudi Arabia and the United States traded charges with Iran on Wednesday over an alleged plot to kill the Saudi ambassador to Washington, deepening divisions and sharpening a contest for power in the oil-rich Gulf.

The Saudis, long at odds with Tehran, said Iran would "pay the price" for an exotic plot described by U.S. officials to assassinate their ambassador. The United States threatened further sanctions on Iran, while Tehran called the accusation a fabrication designed to sow discord in the region.

In Washington, U.S. officials said it was "more than likely" that Iran's supreme leader, Ayatollah Ali Khamanei, and the head of its elite Quds force knew of the alleged plot. But the officials acknowledged that they had no hard evidence for the claim.

The American officials, speaking on condition of anonymity, also said it was possible that Iranian President Mahmoud Ahmadinejad did not know.

Those comments raised the prospect that the affair -- handled, analysts said, with little of the professionalism that usually marks Iranian covert activities -- was the work of a faction within Iran's divided political system.

U.S. officials said the elaborate plot -- which they compared to a film script -- would justify pushing for a new round of U.N. sanctions against Iran. The U.S. Treasury slapped sanctions on Mahan Air, a commercial Iranian airline which it said provided funds and transport for Iran's elite forces.

"The president and the king agreed that this plot represents a flagrant violation of fundamental international norms, ethics, and law," the White House said in a statement issued by press secretary Jay Carney.

Earlier Carney told reporters: "We're responding very concretely with actions we know will have an impact on Iran and will make clear this kind of behavior is unacceptable and will further isolate Iran."

Speaking in London, Saudi prince Turki al-Faisal, himself a former ambassador to Washington, said: "The burden of proof is overwhelming ... and clearly shows official Iranian responsibility for this. Somebody in Iran will have to pay the price."

"America wants to divert attention from problems it faces in the Middle East, but the Americans cannot stop the wave of Islamic awakening by using such excuses," Larijani said in an open session of parliament.

UNMASKED
U.S. authorities said Tuesday they had unmasked the plot by two Iranians linked to security agencies to assassinate Saudi Ambassador Adel al-Jubeir. One, Manssor Arbabsiar, was arrested last month while the other is believed to be in Iran.

They described a convoluted conspiracy involving monitored international calls, Mexican drug money and an attempt to blow up Jubeir, a confidant of King Abdullah.

Some Iran experts were skeptical, saying they could not see the motive for such a plot. Iran has in the past assassinated its own dissidents abroad, but an attempt to kill an ambassador of another country would be a highly unusual departure.

U.S. officials acknowledged that the plot's exotic elements were far "outside the pattern" of past activity by the Quds Force, an arm of Iran's Islamic Revolutionary Guard Corps.

Senate Intelligence Committee Chairwoman Dianne Feinstein, talking to reporters after a briefing by FBI, CIA and other officials, said, "there's no doubt, at least in my mind" that the Quds Force was involved in the plot.

She said she had no specific information that higher levels of the Iranian government were involved, but it was unlikely the Quds Force would have acted without authorization from above.

Feinstein also raised the prospect of a "chain" of plots. "Intelligence indicates that there well may be problems elsewhere," she said, without being more specific.

Senator Saxby Chambliss, the committee's ranking Republican, cautioned that "this was an action that was not directed at the United States," but rather at an ally, and that fact should guide the U.S. response.

U.S. court documents accuse Arbabsiar, a naturalized U.S. citizen with an Iranian passport, of paying $100,000 to an informant, who had posed as an associate of a Mexican drug cartel but in fact worked for the U.S. Drug Enforcement Administration and alerted the authorities to the plot.

Arbabsiar made phone calls to Iran to the second suspect, Gholam Shakuri, described as a Quds Force member.

Kenneth Katzman, an Iran specialist at the Congressional Research Service, said there were elements of the alleged plot that did not make sense.

"The idea of using a Texas car salesman who is not really a Quds Force person himself, who has been in residence in the United States many years, that doesn't add up," Katzman said.

"There could have been some contact on this with the Quds Force, but the idea that this was some sort of directed, vetted, fully thought-through plot, approved at high levels in Tehran leadership I think defies credulity," he said.

"IMPORTANT SIGNAL"
Rosemary Hollis, head of Middle East studies at London's City University, said it was hard to say how serious the plot was, especially as the suspects were caught in a sting operation, but the announcement was "an important signal of a very volatile and potentially dangerous period ahead."

A Western diplomat in Riyadh said the charges were likely to be discussed at the U.N. Security Council.

"The U.S. allegation is, obviously, a politically motivated move and a showcase of its long-standing animosity toward the Iranian nation," the ambassador, Mohammad Khazaee, wrote.