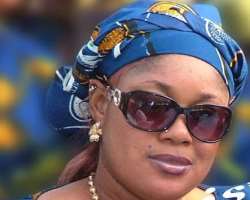 Tayo Odueke, a Yourba actress who is fondly known as Sikiratu Sindodo is alleged to be having a sizzling romance with Murphy Simba, a popular socialite, a prominent businessman, tall and handsome. He is one of the big boys within Lagos Island who is said to be happily married to Biola, a fair skinned lady who runs a shop at Alade Market. A source said that the romance between the two is an open secret as it has become one of the talked about issues in town.

Na waoh! Remember Sikirat was suffering from heartbreak when her lover MC Oluomo called it quits with her for allegedly stealing his jewelry. Initially, Sikirat denied it but when the guy threatened her seriously, she confessed and returned what remained of the collection, part of which she had flung in Yaba Market. Her mother was reported to have acted as the intermediary and she had pleaded with Oluomo to forgive her but he refused and vowed never to do anything with her any more. Maybe, the rejection of Oluomo has dwindled her finances as she now wallows in penury, coupled with this global economic meltdown which is no respecter of divas and stars. Now, 'Ndi Sim' (gossips) said she has found joy and/pleasure on the shoulders of Murphy. And that the duo are constantly seen in Murphy's hotel. If this is true, I'm sure by now Murphy should know that it's wise to watch over his gold carefully like the fowl watches over its chicks because of the hawk. I'm sure he understands. This is a proverb from our fore fathers o! 'No be me talk am.'

Also, I hear that Murphy is dating Tope Olubanjo who is the sister-in-law of Sikirat. Tope who is said to have two children for Sikirat's brother met Murphy first. Tope was keeping the affair secret from Sikirat but when the two discovered that they were feeding from the same 'pot of sweet soup,' things fell apart between them and till date, the centre has refused to hold. Now that Biola the legally married wife of Murphy has heard all these, she has vowed to deal with the two 'thieves.'