NIGERIA, AT 51, CARELESSLY HOLDING A GUN 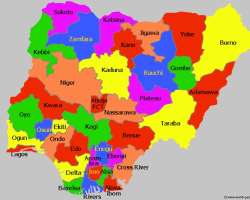 A kì í mú ìbá»n tetere. One does not hold a gun carelessly. (Always be careful in handling dangerous matters.)

As we count days to our 51st independence anniversary, all is not well with our beloved nation Nigeria. This in itself is no news, given the fact that this phrase "all is not well" has become a popular refrain in recent years.

Can all be well then, sometime in the future; is it possible that as a nation, Nigeria can still find character and strength to hold her head up...? It remains a million Naira question.

For a nation that has completely lost its sense of rage, the norm has become abnormal, the abnormal, so normal and a way of life. Deviant attitudes supported by an elite leadership well disconnected from a docile populace.

At 51, we are society where leadership would deny rape that is obvious, a society that has lost its sense of morality as policemen would fight publicly for N20 that is when they are not killing an innocent soul for the same amount.

If a student is not being gang-raped, a corp member is chief-raped, or a poor little girl is police-raped, yet no rage and we search for a character in such circumstances.

At 51 years, institutional rape is on the rise, ASUU on strike, education on the decline, system gradually collapsing and yet no rage, we try to find character through phrases such as Transformation, 1million Point agenda, re-engineering, redemption, and all such catch words, good people, great nation, but truth is that silently the underdevelopment of our nation continues in almost all spheres.

At 51 years, we are not outraged at how we have suddenly become a nation that produces god of men rather than men of God, pastors with several aircrafts while the congregation a re hoodwinked with prosperity classes, Islamic scholars turned Taliban.

I went to a public school, Archbishop Aggey Memorial Secondary School, it was situated in a Lagos suburb called Mushin, I was taught English Language in Yoruba, for it to sink in, and properly understood, it was inside 51 years.

There was a semblance of character then; because it was part of the much-mouthed good days...it was not old. Then it was a burden to spend 50Kobo. One Naira had value and character.

Many of us would recall that Onward exercise book, 20, 40, 60 and 80 leaves with the mathematical timetable behind, now replaced with some flashy notebooks with the head of some foreign soccer league star name and photo or club, we have lost our character to the English Premier League.

We have not lost our rage, in recent times if left on our own we may soon require FDI (Foreign Direct Investment) to get married. As everything now is based on some form of partnership or the other.

A governor travelled to get foreign donor to assist in building a new government house, at 51 years. The economy is near doldrums in Europe, and the other parts of the world, we have the potential to do as China is doing, or translate into some African Alsatian if we cannot become tigers. But we consistently spew chance after chance away.

Government officials tour the world with monies better used for meaningful development chasing shadows that you cannot trust in the dark. We beg them with ten years VISA, they treat us like rag, we get four weeks VISA in return after some blue eyed woman behind a counter is sure we’ve got millions to spend in Disney land and we see nothing wrong.

At 51 from the era of draconian decrees by the military we have swaggered to the democratic version which is simply 'pay-as-you-go, talk-as-you-want judiciary. The executive continues to grope in the dark, looking for a replacement for Pharaoh, Nebuchadnezzar and some army general, when little strides cannot be taken would it not be foolhardy to expect giant strides.

When a legislative arm remains in recess while the nation burns, does it deserve commentary, when a member running from the bomb scare some weeks back told newsmen, "cure is better than prevention" and we wonder why the nation is losing its character?

At 51, we are still serving dinner with the perennial guests, corruption, nepotism, abandoned projects, lack of infrastructure, bloated government, insecurity and lack of decisive will in governance.

At 51, very little as we battle to renegotiate our collective existence as a nation, confidence in government divided.

Reports have it that we stand at 134 in Transparency International's annual corruption perceptions index, which ranks 178 countries in order of least to most corrupt.

At 51 its either government has no commitment and has ability, or its ability is never matched with commitment.

As we mourn yet Independence, I dare ask where has all the increased oil revenue gone to, no corresponding increase in quality or quantity in the lives of Nigerians.

I quote copiously from an IRIN report...
"In the human development index Nigeria currently stands at 142 out of 169. Life expectancy is only 48.4 years and unemployment is estimated at 19.7 percent. Maternal mortality was 840 per 100,000 live births in 2008, according to UN Children's Fund figures adjusted for underreporting.

In Rivers State, in the oil-producing south, local government revenues have risen while the level of basic services declines, according to a 2007 HRW study.

According to the study, revenues in 23 Local Government Councils rose steadily from US$31.7 million in 2000 to nearly $115 million in the first eight months of 2006. Despite increasing revenue, basic services frequently remained a low priority. For example, in Opobo/Nkoro the 2005 budget saw only 2.4 percent (or $170,000) allocated to education after teacher salaries - with half of that given in bursaries to university students from the local government. Only $23,000 was allocated to equipping, building and repairing local health facilities. This compares to the chairman's travel budget of $53,800, and his "miscellaneous expenses" budget of $196,500.

Limited and declining basic services are a concern across the country. For example, national good water coverage fell from 49 percent in 1990 to 48 percent in 2004".

At 51, citizenry have very little to show. The power supply is nonexistent in many parts of the country so people rely on generators more than the national grid... People go to hospitals to die and public schools are going extinct.

With all these, there is no outrage, we go ahead like all is well, feeding on our false resilience. Hoping against hope, we keep holding the gun of nationhood carelessly, I end asking...would there be a Nigeria, in the next 49 years, what would it look like...?