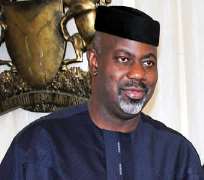 CALABAR, October 04, (THEWILL) - Governor of Cross River State, Senator Liyel Imoke, says the State is going places and that foreigners are interested in investing in it thereby creating jobs and wealth.

Governor Imoke, who disclosed this during a religious programme, “Cross River Pray”, to herald the 51st Independence Anniversary Celebration at the Main Bowl of the Cultural Centre in Calabar, stated that though the State is not having enough natural resources to depend on resource control, it is endowed with enough human resources to turn things around.

The Governor, who hinged his message on knowledge, stressed that it is the foundation for development and that the destiny of the people lies in their hands, adding that there was no reason for people to be run down by others because it is through togetherness that they can build the State.

The wife of the Governor, Mrs. Obioma Liyel Imoke, in her remarks, described the occasion as a deliberate attempt by the State to make things happen, as it will not be the same again.

Mrs. Liyel Imoke further disclosed that the State intends to organize a Solemn Assembly for the youths in November in order to give them their pride of place.

Highlight of the occasion were prayer sessions led by Men of God for the State.