Mayweather knocks out Ortiz - Money' cashes in amid sensational scenes 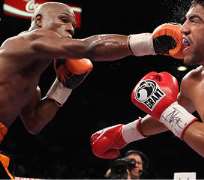 Floyd Mayweather Jr maintained his perfect record with a controversial fourth-round knockout of Victor Ortiz at the MGM Grand in Las Vegas on Saturday night.

Mayweather improved to 42-0 and claimed the WBC welterweight title as he blasted Ortiz (29-3-2) to defeat amid sensational scenes.

The controversial finish came after Ortiz was deducted a point late in the round by referee Joe Cortez for an intentional headbutt. Then Ortiz, clearly full of regret, cuddled Floyd and apologised.

As the two fighters then broke, Mayweather unloaded with a left hook and a right that sent Ortiz crashing to the canvas. TV replays appeared to show that neither Ortiz or Cortez were looking at Floyd when he unloladed.

The controversial ending may well take some of the gloss off what had up to that point been a virtuoso performance from 'Money'.

In the groove
Despite a 16-month absence from the ring he was in the groove right from the opening bell, and could hardly miss with that trademark right-hand counter.

Ortiz tried to get inside and throw punches in bunches, but Floyd merely smiled through his gumshield time and again before countering and making good his escape.

By round four it was a boxing lesson from Mayweather Jr, with Ortiz quite simply outclassed. And it appeared that frustration got the better of Victor as he butted Mayweather with Floyd on the ropes.

Then, within seconds it was over, with the MGM Grand erupting into chaos as Mayweather delivered the knockout blow.

Floyd v Larry
The post-fight interviews in the ring were almost as high-octane as the bout itself, as Mayweather and HBO analyst Larry Merchant became engulfed in an angry slanging match.

Mayweather said: "I got hit by a dirty shot. The rule is protect yourself at all time. We are not here to cry and complain about what he did or I did dirty."

When Merchant pressed Floyd about how the fight had ended, the fighter erupted with "You never give me a fair shake. HBO need to fire you. You don't know s*** about boxing. You ain't s***."

The 80-year-old Merchant, clearly upset by those comments, responded tersely: "I wish I was 50 years younger - I'd kick your ass."

The defeated Ortiz meanwhile said: "I was called to break by the referee. I obeyed, I looked at the ref and 'boom' - I was out.

"It looked like I butted him (Mayweather) intentionally. I apologised to him, I'm not a dirty fighter. He came forward really fast, I wasn't expecting that, my head was in his face and I was like, oh, oops.

"You can look at it two ways. I came out here to show the fans a good time and as far as I'm concerned I think they did have a good time, apart from that little miscommunication by the ref. But hey it happens. I'm not perfect, no-one is and neither is the ref. I have no-one to blame for it - it's a learning experience."