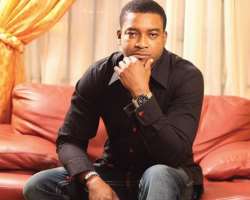 Having stepped out of obscurity into the limelight about 15 years ago, gaining visibility through modelling, television and radio shows, Chidi Mokeme has been able... to register his name in the hearts of many lovers of movies in Nigeria and beyond. In this encounter with TUNDE OSOWE, the Anambra State-born artiste speaks on what makes him stand out among his peers in Nollywood.

What brought about the idea of bad boy?

Well, there is no big deal about that. It is just a personal concept which has now become a household affair. My journey into the movie industry about 15 years ago, was due to the good rapport I had with most producers and actors. Before then, I was into modelling in commercial advertisement, television and radio shows. Of course, I enjoyed it greatly. My transition from modelling to acting came about due to my relationship with directors and other actors. I have always been a good observer. I would survey my environment carefully so that I can fit in perfectly. I have to say I love playing the bad role because there is a lot of fun there. You drive all the good cars, get the women while the good guy is busy frustrated and running around. Of course, I prefer to play the role. But I play all kinds of roles as may be determined by whoever is in charge.

Having worked in the industry for such a very long time, I have maintained a good rapport with just about all high flying producers, directors and actors and people around me. That really mean so much to me. I have learnt the tricks of the trade and thoroughly enjoy the adventures that come with shooting a movie on any location in and out of the country. Giving the working conditions, the things we have to go through when we are shooting out there on location in some remote area, we do a lot. And this has actually changed my orientation. I'm inspired by all of this. I do have problem at times to list all the movies I have featured. But one of the recent is “Keep my Love” which featured two Ghanaian actresses, Jackie Appiah and Yvvonne Nelson.

What makes one an accomplished actor?

Accomplished actor! At the stage where I am right now, the accomplishment is yet to come. Right now, I make a conscious effort to be useful, to be responsible, relevant and to have meaning in society. I believe the accomplishment will come at a later date because I have focus and I know what I am doing this for. The life of an actor is more than just partying, being famous and having a good time, such fame can be the unique platform needed to spark off a change in a rapidly growing industry like Nollywood. But ultimately, one has to be consistent and maintain a good posture at every twist and turn.

I grew up like every other Nigerian with a humble beginning. I grew up in Surulere, Lagos, from a loving family of four. We hail from Anambra State. I had a pretty upbringing, nothing extravagant, but with responsible parents who tried to make sure their children get what they needed. After my elementary stages, I had a background in information technology at the Institute of Management and Technology, Enugu and with a diploma in Computer Science from Yaba College of Technology.

Did you go for any professional training in acting?

No really. In my own case, I would say experience seems to be the best teacher. Over the years, I had featured in many hits and I enjoy working with the likes of Izu Ojukwu, Ami Amenech, directors of the hit thriller armed robbery – Desperados. They are very focused and professional. Izu pushes you and wants to bring everything out of you, because he gives his everything and in turn, you want to give him everything too.

What is your take on the Nollywood industry? Some people believe it is non-existent!

So far, Nollywood has become such a cultural phenomenon that it transcends class barriers and impacts the people from the very affluent in society right down to people of lower class and tradesmen. It is the third largest movie industry after Hollywood and Bollywood. It has garnered international status for telling the painfully honest stories about the complexities of Nigerian life. In Nollywood, we do things in a private-driven style with no government funding or assistance from the big corporate bodies. We actually need the government to take the industry seriously to enable it to stand by itself.

How can piracy be curbed?

Policies should be enacted to put an end to piracy, illegal distribution as well as ensure standardisation. The menace of piracy in this country is not really helping matters. Several efforts have been taken in the past to put it on hold, but those steps have not done the magic. In the light of this, the government and other concerned agencies have to come in as a matter of urgency to save the industry from these hovering obstacles. Amendments to the constitution should also typify the movie indutry, steering it in such a way that creates a lucrative foreign exchange market for Nigeria, to bring about opportunities for people to get employment. If the industry is put in proper shape, you will agree with me that most people who are jobless today would be gainfully employed. In essence, the number of touts on the street and even militants in the Niger Delta region will reduce drastically.

I have a big heart and of course, I have nourished it through careful observation of the world around me. I'm known for monitoring the impact and changes gaining momentum in the international political arena. I indulge myself in the aural of President Barack Obama, a man who has grown to become my role model since his highly publicised campaign to be the first African-American President of the United States of America. I'm lifted each time I recall the scene from the recent G-20 summit and President Obama's breathtaking trips since he assumed office. The guy is making too much sense, more sense than I have heard in the past 15 years or thereabout. He really turned my thinking around and gave me a new platform of possibilities in the face of daunting challenges. Success is nothing if it doesn't impact on everybody around you. Obama is a reflection of my innermost desire, to teach people that you can be who you want to be and can explore your potential to the fullest.