As a child, I was my brothers’ punch bag — Funmi Eko 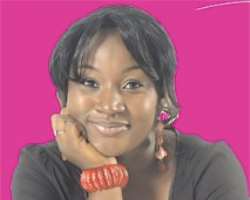 A popular face on television, Funnmi Eko needs no introduction. As an actress, she has excelled. Her radio programme Eko and You which has won the hearts of many Lagosians sets her apart from the crowd of Nollywood practitioners who depend solely on their acting skills to survive.

She spoke to Bridget Amaraegbu in this interview during the week.
Read on.

I still remember those years when my dad would encourage me to listen to the Network News. For me then, it was like torture.

But when I got used to it, I fell in love with Eugenia Abu. Each time I watched her, I saw a balance of home and work. Then, I would tell myself that I wanted to be a newscaster so that I could be like her.

This passion kept on and sometimes I would lock myself in the room and stand in front of the mirror and read out any piece of paper. When you start with such passion, you'll be able to scale through the dry weather in the industry because sometimes, it's really hard to get to the top.

You were in the first episode of Broken Songs but later disappeared. What happened?
Nothing too serious. It's just that myself and the producer were not able to reach certain agreements. And, like you know, two people cannot walk together except they agree.

But I'm sure that if something comes up from the same producers in future and we're able to reach an agreement, I'll be willing to work with them.

You're gradually moving into radio. Will you still have much time for TV?

There's always time fo your first love, and my first love is TV. My radio programme is called Eko and You, and it's basically about entrepreneurship and enlightenment. I try to deal with certain things that young people shy away from in that programme, and the day to day happenings in government and society.

One of my mentors, Sunny Irabor, will always say that you should know something about everything to be complete. Because you don't know where or when your knowledge of a particular thing will be relevant.

Citi Sisters is being put together by Royal Root Productions, and it's about single hardworking females. It talks about their differences, work, sorrows, passion and joy, either at home, work and relationships.

Do you put the real you in the programme?

I have a lot of me in that programme, and that's why I watch it very often. Sometimes, when I watch that programme, I feel like I wasn't acting because that is the real me (Funmi Eko).

I played the role of a stock broker who's independent and pushy, always wanting to have her way.

At what point did you realise you could do your own personal programme (Eko and You)?

I'll say that there's a spirit of entrepreneurship in every man, whether you're working for somebody, or just doing your own thing. No matter where you work, if you don't have that spirit, you'll never be able to meet up deadlines. Then you may be regarded as an incompetent staff and sacked.

Working for yourself or doing your own business is not always easy. So, you have to buckle up very well before going into it because you can get really cold if you've not done your home work well.

So, is it cold or warm in your pocket right now?

It's warm enough. But you have to be careful when talking about temperature (laughing). Profit comes in various ways. It could be money, fulfillment or even people's critics.

So, I can say my pocket is warm in that sense and things can only get better. I'm believing God for the best to happen.

Funmi Eko, Why the name Eko?

(Laughing). Oh God, I'm not. In fact, I've had to ask my dad about the name. Some people even think it's an abbreviation or a nick name. But he said it's our family name, and there nothing anybody can do about it.

My birthday comes up every August and I was born in a family of four, three boys and me. My mum is Igbo from Owerri and I can speak Igbo language very well (Ana m asu Igbo ofuma ofuma).

I'm a proud blend of both Yoruba and Igbo. So, it gives me a wider perspective to life. I'm not tribalistic at all. My dad was in the army. So, you can see I'm a barracks girl. In the barracks, you have people from every ethnic group.

So, you can easily mix up with any ethnic group. I grew up being loved as the only girl. But once in a while, my brothers will use me to practise boxing and wrestling.

How did you cope with a military father?

Generally, when we are much younger, there are certain things our parents do to us and we think they're being wicked. But those things mould us. I learnt a lot f discipline and the spirit of contentment from my father. He taught us to stand out in the crowd, no matter the situation.

Though he wasn't very wealthy, we enjoyed the little he had. So, growing up with a military father was tight.

Sunny Irabor, Eugenia Abu. Do you have more mentors?

Oh, I have a long list of mentors and he's one of them. I'm sure he doesn't even know it. Sometime in the past, I was working with Daar Communications but not as a staff because I wasn't paid.

It all started when I was watching a programme called Sharing with Yemi Adenuga, and one day, there was a call for audience which I attended. After the programme, I walked up to Yemi and said, “I can do what you do.” And she looked at me and asked me to come for the next edition.

When I came in, I stood at the door so that I wouldn't miss her. As soon as I saw her coming, I walked up to her and introduced myself. So, she gave me a written pass into the premises.

And all this while you were not paid?

Yes, but I was happy because each time I walked into Daar Communication premises, I felt like I had stepped into paradise. Just learning how things worked there made me happy.

It was during this time that I met Sunny Irabor when he came to speak in a seminar. I asked if I could come in and he told the organisers to let me in. That day, I heard him say so many things that have helped me, not just as a presenter but as an actress.

The years in Daar Communications. What happened next?

After those years, I started working with Procter and Gamble as the PA to the marketing manager. And one day, a friend of mine called me to come for an audition. I went for the audition and got the role.

So, I resigned my job immediately without knowing how much I would be paid for the role. So, we started rehearsals (myself, Keppy Ekpeyong, Chioma Chukwukah and others).

It was during the rehearsals that someone asked me how much they'll pay me and I was surprised that I didn't even know. But I didn't mind. I was just putting in my best.

So, that was where my acting career started from. After that I went for another audition for a female vocalist in the late Jaiye Aboderin's band which I got and was singing with Jaiye and Stella Damasus at that time.

I must say a big thank you to Stella because I learnt so many things from her and also met people who've been very helpful to me in the industry.

And your love life?

So, what are you waiting for or are you being too choosy?

No, I'm not. The Bible says that he that finds a wife has found a good thing and I've been found and engaged. I'll invite you for the D-day soon.

What attracted you to this charming prince?

Friendship. We've been very good friends and he's not in the industry. So, everything we say to each other about our different industry is juicy and interesting.

Is he not jealous about your career?

No. I think it's the duty of every woman to reassure her man that her love for him is tight. Again, he should have a clear understanding of your job and I know my limitations. Once that's in place, then we're tight.

Is he also an Igboman from Owerri?