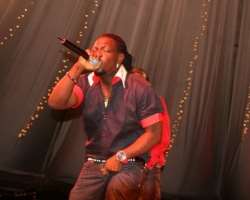 How did you feel winning the Hip Hop artiste of the year award?

I feel good and this is the second time I am wining it and it makes me feel like I am set to get so many awards. The Hip Hop award doesn't freak me like that; I am looking forward to when I will win the Grammy. The paramount thing for me is speaking my mind about issues.

Many say you sing about yourself

That is because I don't gossip. I want people to look at what is going on in my life and work on yourself or just take it as an example. You don't need to wait for something to get to you before you know it exists.

I don't just sing about myself it, just started in my Gift and the Grace album. The songs are about the gift of my talent, which God gave me and the grace which is moving me forward. So I was just praising God and myself.

Don't you think people will misconstrue your true intentions…?

He is my father and I am his son. I love Him; that is why I always call Him. Knowing Him has been a great help to me. Life without God is dead. No matter what I do I remember God and even if I don't go to church, He is in my heart.

I believe in him so much and in my family we are 15 children and I am the last child, and there are things in my life that His hand is evident. People say I talk about bad belle people and I say yes, I will continue talking about them because I want them to know that I know they are around and I am ready for them.

Have you had encounter with this bad belle people?

I can't see them but they are many. You can have bad belle people even in your family, living with you, working for you. So for the fact that you cannot see all of them, it's only God that can help you chase them away.

A lot of people have said wrong things about me, they say Timaya is this and that but they don't even know me, yet they talk about me like they know me and that makes them worst than the bad belle person.

They just want to run me down, people write lies about me and that can make my fans not to like my music so it takes the grace of God to overcome all these. So that is why I always call God.

I have not been caught as a militant before but people say I am a militant just because I am from the Niger Delta region, but then I don't argue with the name, I love it because controversy sells.

I think I am paramount; that is why they talk about me. I never actually wanted it this way but then, I never liked a situation where people just kept saying good things about me, it makes me scared, so writing or saying wrong things about me once in a while is in order.

I don't like it when people praise me but sometimes I do things so people can write and talk about it, its not as if I pay people to write about me.

Like what I did at the Hip Hop awards where I held up my award in front of my crotch and said I dedicate it to Empress Njamah, I just did it so that people will have something to write and they didn't disappoint me because I saw the papers the next week.

I was just so calm and people kept writing and saying things about me. It pains me when I didn't do anything. So let me do something so that they can write about it because even if I don't do anything people will still write.

Imagine in January, they wrote that I had gone and done a secret marriage introduction with Empress Njamah and that she was four months pregnant. That is a big lie, mega lie. I'm serious. If she was 4 months pregnant then she should be giving birth by now but she has not.

They say I am arrogant but I am not.

By doing what they say, won't that affect your fans?

I was not like this and they said I was and they made my fans see me that way so let me do those things. Some people don't just want to see you grow. But they expect you to do something and even when you don't do it they will write. It's bad. Sometimes I look at myself and wonder why.

Is the bad boy image helping your music sales?

I was nominated for artiste of the year at one award and I dedicated it to one of the magazines that has written much about me because they made me popular. As such if anybody asks me about my life, love life, I tell them to ask that magazine because they know my life history but it's all lie.

I am not trying to boast but I am a nice guy. I get tired of things easily. I love doing something new. I am focused and very positive minded. I am a friendly person though a lot of people have judged me by what they hear so when they finally meet me they ask if it is really me, because they had heard I was arrogant.

They say I am not educated but I am schooled, at least, I go primary school and others.

How did music start for you?

I had the music thing in me. I was a choir boy in Assemblies of God then. From there I moved on to Living Gospel Mission in Port Harcourt, after there I stopped being a choir boy.

You know when you have bad friends that will laugh at you because you are in the choir…I was shy of the fact that I was serving God because I didn't know what I wanted.

Lagos market in Nigeria is the biggest and breaking into it was not easy because I was not respected since I was from the Niger Delta. But I owe it all to God.

Initially, the challenge was getting my song played on air and being played by DJ's as I was dependent on word of mouth as I didn't have the money to pay but that is a thing of the past because every DJ is my brother.

Right now whatever I say about the region cannot help. The only thing that can help is when people do the right thing. The situation in the region is like me as an artiste collecting so much money from the federal government, I have a group working with me like my Dem Mama crew, yet they don't see the money, my manager doesn't see the money, they won't be happy and can react in different ways, like fighting.

That is what is going on, they know the right thing and as such they should do it. I can only speak through my music about these issues. That is why I am called the Eberepapa 1 of Bayelsa and it means the town crier of the people.

I sing conscience music - Dem Mama Music. I am a preacher. I know one day I will end up in church where it all started. I am a child of God, the only thing I do is just that I follow women, I don't tell lies, I don't steal, following women is my only sin.

About you and Empress Njamah

I just take them as they are. I don't go out and don't hang out. They get my numbers and call me but I am very strict when it comes to women so when they call me saying they want to see me I let them know that anything other than business I should be counted out.

Craziest thing a fan has asked you to do

A female fan asked me to give her one lock of my hair but I didn't give it to her because it is my hair and it is precious to me.

When did you start growing dreadlock?

I started growing it three years ago when I was working with Hilda Dokubo's husband, Mr. Mrakpor. I like him so much, we look alike so I used to like doing the kind of things he does so I started keeping dread.

Not dancing with women

People that carry dancers are those that can't perform on stage. People want to see you not some girl shaking her booty on stage. It thrills people when they see you the artiste dancing. The dancers crowd the stage.

I feel so happy when I see my fans and because I don't get to see them all the time, whenever I see them I want to perform for them, no matter how long it takes. The energy to dance on stage comes from God.

My real name is Inetimi Odon. I am the last of 15 children. I'm from a polygamous home. Being the last child was not that interesting. I grew up in Agip Estate in Port Harcourt.

Growing up was good, my father was a banker so he used to buy things in cartons for the house but as I grew up, he retired from the bank, was duped by some fraudsters and we got broke, so me I had to make way for myself. As for education, I'm schooled.