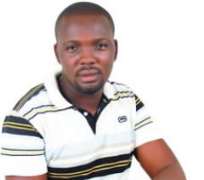 For those who saw the obituary of young movie producer and actor, Yomi Fabiyi, in Somolu, Lagos, it was a bitter story to tell

Some have even started shedding tears, saying the thespian was a nice and easy-going fellow.

But unknown to them, the obituary, which was pasted in some parts of the area was designed for a flick titled Ite Idajo, in which he played the lead role.

The story is about a judge who has two children. One is a student union government president, up and doing, but he is not impressing his father, while the second a lady is calm and quiet, but a cultist.

One day, policemen tell the judge that his gun was seen at a robbery scene.The judge believing his son is responsible for the act sentences him (the son) to death by hanging.

He later discovers that the boy is innocent.