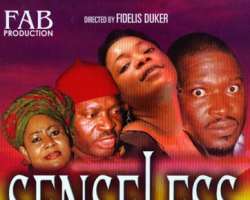 NIGERIA had a pavilion again this year at the 62nd edition of the Cannes Film Festival and had a representation by government delegation, the media and film practitioners. Nigeria had only one entry at the festival which was a short film, Senseless, a film directed by Fidelis Duker.

The film was screened at the short film corner of the festival. It was impressive as it received rave reviews and comments from those who witnessed the screening.

Senseless is an emotional drama on domestic violence. It is the story of a young lady, Adaora (BIMBO AKINTOLA) and her temperamental husband, Kola (FEMI BRANCH), who in his usual fit of anger batters his wife until one day when he tries to batter her and in self-defence, she murders him. The film also stars Kanayo Kanayo, Madam Kofo, Ngozi Ezeonu, Segun Arinze, among others.