Foluke Daramola: My Life, My Marriage, My Image 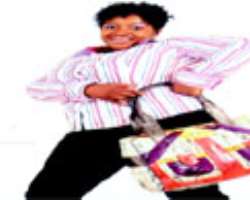 Foluke Daramola has in the last couple of years suffered bad press due to crisis rocking her marriage. Many people had in fact associated the crisis with her non-appearance in movies for over a year. When Daily Independent however came across this well endowed actress lately, she attributed her 'disappearance' from the screen to re-branding.

"I am re-branding myself.

Re-branding in the sense that I just got tired of appearing in every movie, going to locations and shooting movies. I thought that there are better ways of distinguishing one's self," she said sharply.

Nudged by curiosity, our reporter wanted to know what actually prompted this star of the Yoruba film genre to temporarily opt out of the industry that made her.

"To a large extent, it is true that I opted out temporarily of the movie industry because of the proliferation in the sector. There are so many bad wagons in the industry that just come to the industry because they want to show their faces and they believe they will make money by coming to the film industry. They all want to be celebrities without knowing the objectives and ethics of the profession. I believe I have to segregate myself from this bunch of people so that viewers won't add me to the bad wagons since I am educated. The industry undoubtedly is growing but we still need to remove the bad wagons from the industry so that we can achieve more meaningful development.

I believe if we can get rid of the bad wagon, it will be very easy for us to fight the issue of piracy. Professionals know how to go about their job because they know their onions in the field. There are good professionals in the industry but the bad wagons are the one's making mess of it," she volunteered.

Currently, Daramola, a mother of two, is back in school for her masters in International Law and Diplomacy at the University of Lagos, a feat she is always eager to tell anybody that comes her way. But aside this, what is taking Foluke's time now that she is not on set, our reporter asked, and she answered as if she had been waiting for such question, "I am working on some projects and I am trying to save my face for better jobs. I have been doing my masters and I do some business. I sell babies stuff, I travel out of the country and bring in babies stuff, and I take care of my kids.

I am working on a movie called Wakati Eda (destined time) and I am also working on a serial. Those are the things taking my time for now. I have spent much on these projects. I have spent like N4.3million on Wakati Eda that has really taken so much of my capital and most of the time I am just trying to perfect these two major projects that I have now. It will be premiered in London and other countries.

Speaking further, she remarked that Wakati Eda is on a story her old uncle told her sometimes back and a combination of recent happenings that beings have to wait for their destined time. To her it is a just sermon.

This lady whom some of her colleagues have tagged 'peacock' admitted that she rarely keep friends in the industry because she is quite temperamental.

"Almost everybody in the industry is my friend. Moji Olaiya is about my closest. Lola Alao is also a very good friend of mine. Another person I am also close to is my manager. I try to keep a distance between people and myself because I am a little bit temperamental. I don't want to be misunderstood so I try not to be too close to people."

Whether Foluke aware that some ladies in the industry are tagged cultist, Daily Independent asked her. Her response was sharp and direct.

"I have also heard about that but I don't know exactly those who are involved in those activities. I don't trust you people (journalists). You had a way of tarnishing people's image, as you have done to me in the past," she answered.

This graduate of International Relations from the famous Obafemi Awolowo University is one of the star ambassadors of Project Alert a non-governmental organisation set up in 1999 to fight abuse against women. Some people have attributed her involvement in this organisation as a result of her experience while she was in her husband's house. But she had other reasons.

"While growing up, I had a friend who was raped and days after that abuse, she died. Few weeks before I became an ambassador of Project Alert, a man felt his wife offended him and all the man did was to lock up the woman in a room and hours later she died. It is absurd for anybody to think that I joined Project Alert because of my experience with my husband. I believe in NGO's because most of them just like Project Alert are out to help people and so I join them to act as a voice to the womenfolk.

"I have never experienced such with my husband. No matter how long you people have known each other, you are bound to misunderstand yourselves because you are both coming from different backgrounds. Whatever issue I had with my husband had nothing to do with why I joined Project Alert," she replied somehow angrily.

One topic she would not want to talk about undoubtedly was her failed marriage but she managed to talk about the issue when our reporter asked her if truly she was planning to get married as it was recently published in some tabloids.

"I have not even told you guys that I am separated from my husband let alone divorcing him. I don't know where you guys got the information that I want to re-marry from. I am not divorced so I can't re-marry now. Look at what they did to my big sister, Lola Alao; they made a mess out of her new relationship and they tagged her controversial. This lady has separated from the other guy for over three years and the law says if you are staying apart for more than a year that is automatically a divorce but because you guys (journalists) want to make a mess of her life you have called her all sorts of names. I don't see reasons I should do that to myself with my level of education. I was linked with one Tolulope, I don't think I have a wooer who bears that name," she thundered.

Speaking further, Foluke who confessed that the press has done more harm to her person and her career than good, said, "Whenever I see things like that I feel bad because most of these things are false but that is one of the many prices I will pay for being a star. I am sorry, but most of you guys are not fit to be in the profession. I believe a journalist should check out his or her information from the source before going to press. Some of your colleagues are fond of tarnishing people's images."

But is Foluke in any relationship now? Our reporter asked her twice before she giggled and answered; "That is a personal issue, which I will keep to myself for now. I don't discuss issues like that on the pages of newspaper except I want you guys to know."

This actress whose major challenge since she came into the industry remains bad press said she is back in school not just to have more qualifications, but also to prepare herself for her future.

"When you have a public face, it doesn't end on the screen. You have to work on yourself so that you can fit into all spheres of life. What is a public face? How can you be a public face as a dullard? I always tell people you have to take a bow when the ovation is loudest. I have been famous since I was 17 years and I cannot be a public face forever because someone has to takeover and I need to fall on something. Take RMD case for instance. He used to be a public face but now a politician. It wasn't his public face that earned him that post but because he worked on himself. I am building my career and I may probably go for my PhD after my masters. I want my children to emulate me academically."

Perhaps, Foluke might still have a soft spot for her estranged husband as she referred to him all through the interview as "my husband." When our reporter asked her if she would love to go back to her husband's house, she smiled and said, "that depends on God. I can't say yes, neither can I say no. Even if I love to that it is not for public consumption."

She admitted that she enjoys being with her children because they are her pride and so she has no problem being a single parent. But are the children not asking for their father? With a smile, she said, "when you have the opportunity you can ask them that. I have a perfect relationship with my children and I know when the right time comes I will tell them but for now whenever my husband wants to talk to them he calls and I give the phone to them."

Foluke, seen to be fond of wearing revealing cloths especially at the upper region, said even when she was with her husband, he loved her looking seductive. "I love myself like this and my husband has always loved me look seductive. I love myself the way I am," she said.