Why I shot film on Moremi-----Mrs. Duro Ladipo 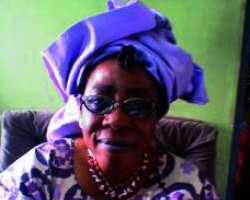 Many people call her Moremi or Oya, following her historic roles in her late husband's popular plays entitled Moremi and Oba Koso. Chief Biodun Duro Ladipo, wife of the late dramatist and theatre icon, Duro Ladipo is still very much around. Just recently in Ibadan, she concluded work on Moremi, a movie based on the original story of same title written and produced for stage by her late husband in the late 1960s.

Actually, Biodun had played prominent roles in many of Ladipo's plays and had earned great respect for her acting and singing prowess. She was also a strong pillar behind her husband's theatre empire, which toured cities both locally and abroad as a traveling theatre troupe, whose major preoccupation then was to promote and preserve Yoruba culture.

Owing to Duro's sudden death and epochal burial rites in 1978, the once boisterous theatre troupe suffered a lull in the succeeding years. But the troupe under Biodun's leadership never lost the enduring salvo that hung success on the strings of hope. She went on to provide leadership for the troupe, and eventually succeeded in producing many plays from her husband's repertoire.
In a chat with Daily Sun in Osogbo, Osun State capital, Biodun disclosed plans by her husband to shoot Moremi into film before his death. She also hinted that she had nursed the hope of shooting the film for the past 30 years, with a mission to sustain Duro's legacy and further relay the hidden messages in the play to the new generation of Nigerians. She equally spoke on her vow at Duro's grave, saying she had never met or had affairs with another man since Duro's death.

About Moremi
The play is a serious one which relayed powerful messages on society, particularly the leaders. It preaches true love and genuine patriotism, as different from the way our politicians behave when they assume power these days.
Whoever watches the play would see courage and determination by the heroine to save her people, and that was exactly what I did while interpreting the play many years ago. So I was not surprised when people started calling me Moremi. Today our leaders promise us heaven and earth but they end up deceiving us. They raise our hopes and later renege on their promises. This is our dilemma as a nation today. How many of our leaders today can sacrifice their lives for their people?

Why the film was delayed
God's time is always the best, and that was another lesson all of us must learn about life.We should all learn to be patient and wait for God's time in every aspect of our lives.
I believe we produced the movie at the time God wanted. Duro tried to make a film out of Moremi but when he died suddenly in 1978, all that hope was almost lost until I started making efforts to make the dream a reality. I tried this for 30 years and I thank God that we made it possible this year.
Right now we have completed editing and are planning to launch it. We have also started promoting the film both on television and radio. It is important to note that my son, Wole Duro-Ladipo played Oba (which his father used to play) while my daughter, Sola Akinsola played Moremi. I too featured in the film, playing Moremi's mother and older Moremi at different occasions. Also Professor Akinwumi Ishola played the role of Babalawo while other top artistes like Adebayo Faleti, Adebayo Salami and Muyiwa
Ademola featured in it. The film was directed by Abbey Lanre while Sunday Ogunyemi handled the camera.

What I miss in Duro
I missed everything about him. In fact, since his death, I remember him everyday and always think about him. First as far as I am concerned, no man can be like him in my life. This was why at his grave, I vowed to remain faithful to him till death. Many people may not believe it but I will remain like that till death. I have had many men trying to woo me but I have always refused politely as I don't want any problem.
Secondly, I made this decision because I knew none of those men would take care of my children the way Duro did.

Plans to revive live theatre
I have always been tormented by the idea of reviving live theatre, especially now that television and video have taken over from the stage. But there is also the problem of insecurity, huge cost of moving the set and epileptic power supply. People don't feel save moving about in the night to watch plays in places that are far from their residences. So what do we practitioners do? We have to think of a solution. May be we should try and show our plays in the afternoon or we take our plays to people's doorsteps. We are still thinking. But really the economy has to improve before live theatre can thrive in this country.
Most importantly, corporate bodies and other well meaning institutions should support the theatre. This is how it is done in advanced countries.

I remember the 1960s when my husband and I used to take Yoruba plays to Europe. We traveled to Berlin, London and America and I remember how we were received and supported by their governments and the people. Even at the local front, we commanded large patronage by people in major cities in the west as well as in the north. Theatre lovers used to look forward to our group and we always moved from one town to the other in our lorries to entertain the people. It was great fun then and we all enjoyed it.

What made travelling (Alarinjo) theatre
During our time, theatre actually grew out of the Alarinjo tradition.Then people usually assembled at the Oba's palace or arena to watch the operas. I remember how we produced such plays as Oba Koso, Oba Moro, Moremi among many others to entertain people. Many of these happened during the day but nowadays, a lot of people work during the day and rest in the night. So they find it difficult to come out in the night owing to insecurity