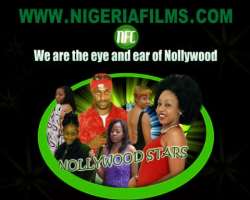 He is dark skinned, good looking, of average height and he sounds like a spoilt child in most of his movies. His name is Bolatito ... Harrison, a English Literature graduate of the prestigious University of Ife, now Obafemi Awolowo University. He speaks with Funmi Salome Johnson recently. In the interviewe, he speaks about his personal life, and his sojourn into the movie industry.

Just like a popular adage that says: 'No gains without pains,' this is very true about Tito's voyage in life. He has toiled for years to make things work for him in the show biz world and became discouraged at a point. But against all odds, he kept doing all he could to make an impact until providence finally smiled on him. He told http://nollywoodgists.com, “I came into the industry as a matter of frustration.”

For this Egba, Ogun State born actor, artisan jobs are not cut out for him and he vehemently ensure that he never did such but he patiently persevered until God made him smile after a long toil. He said, “Before I went into school, there was nothing I could do and I have never seen myself as one who would compromise his integrity. Even as an undergraduate, I have always told myself that I can not do any artisan job. So I was looking for a noble job to do and then I used to be a rap artist. I was going from places to places to get studios to sign me on but then the scam of Tabanson and the Majek Fashek story and a lot of stories we hear would not really want to make you go into any form of contextual deal with them. Even if you get them, you will discover that they want to promote already- made artists.'

Undeterred, Harrison refused to be locked up in his own shell, he continued in his search for what to do to earn some money and make a living, which led him to the Nigerian Television Authority (NTA) where he participated in 'Tales by Moonlight,' a children's programme that ran for years on the NTA network before it was finally rested. He did this for a while amidst all constrains involved until he got a temporary engagement with the Charley Boy Show.

He said, “This phase went on for a very long time and I told myself that I was not going to continue like this, so I started going to NTA and got involved in 'Tales by Moonlight' before I eventually got a temporary engagement with Charley Boy. I was on the drama sketch alongside Tunde Obe, Wunmi, Ali Baba and others and I started growing and after a while, I think I started moving up with the Charley Boy show. I was doing 'man to man' where I was talking like Jegede Shokoya, speaking English with the accent of a Yoruba man. Wunmi was presenting 'Woman to woman' while I was producing 'Man to man' years back and I eventually graduated to the point that I started producing my own programme, 'Sitcom.' I was the Mr. in the 'Mr. and Mrs.' while Iyabo Lawani, who does this Maggi programe, was the Mrs. This was in the late nineties.”

At a point, this handsome dude felt there was nothing left for him to do anymore in the showbiz and picked up the courage to go into the English speaking movie industry where he was again turned down. He continued, “It got to a point I felt there were no more new things for me to do in the show biz and I decided to go to the English speaking movie industry where I was shut down based on tribal differences. I keep saying it, if you are not an Ibo person, you don't go anywhere with the English speaking movies, but in few exceptions may be because of the connections they have and all that. But if you are not an Ibo person, you cannot go anywhere with them.”

He further explained his reason for such conclusions on the issue, “I am a tested case. I am a case study because I have attended so many auditions and many of them would have congratulated me already but by the time they ask me for my name and I tell the my name is Bolatito, a Yoruba man, some can't hide their disappointment and sentiment. They will just tell you to go home and drop your address and that will be the end of it.”

Still talking about his travails, this dark skinned Yoruba actor narrated his ordeal on how he had to trek on foot from Victoria Island to Sango Ota because he didn't have money for transportation. He said, “I can remember that I have had cause to trek from Victoria Island to Sango about two or three times. Then you will do Tales by Moonlight and they will not give you your cheque on time and sometimes they will tell you to come back for your cheque and all that.”

But could he not have simply asked someone for the fare instead of walking such long distance on foot? His answer, “I am not the type to go begging for anything. All the while, I have this pride that if I don't have money, I can trek from Kano to Lagos. I don't know how to beg conductors for free ride. I have never done it and I will not do it because even if someone begs for free ride, the way they will humiliate the person, shame has a way of radiating from that person's body into my body so much so that if I have money I will want to pay for that person. Someone who is nothing will just take the opportunity to rubbish someone. So I don't for any reason do it. I respect people and I hate to be humiliated. I went through these entire situation until after a while when providence smiled on me. I actually embraced it that the chance could be mine and things started working out well gradually.”

All the while, he had no accommodation of his own. He had to squat. He said, “I am a very good squatter; as much as I don't like insolence if you are squatting, you just have to develop a thick skin. Sometimes you just see the person hissing unnecessarily, may be because he is pissed. You must know how to sweet talk him to making him feel that he is enjoying your company, even if he is not. Meanwhile, you are looking for an alternative place to stay.”

His parents were not of any help either as he said this of them, “They were not supportive at all. I got so much reprehensible attitude from my parents who felt after my graduation, I have been of no beneficial return, no utilitarian value to them. At a point, they called to tell me to return the money with which they trained me. It got to a point that my father-in-law called me that my wife and I should go our separate ways and remain best of friends so that she could look for somebody else because our future does not appear very bright. The whole situation became tensed for me that my wife had to suggest to me to go and look for something else to do and when the money comes, I can go into the movie business as a producer rather than the hard time I was going through. But I told her that I was going to remain here until providence recognises me.”

After the sweat comes the sweetness, says an adage. Today, after all the hills and valleys of life that Tito has been through, he has many reasons to smile and give God the glory. He recalls that providence started smiling on him when he produced his first movie, 'Ekoo gbona' in conjunction with Yinka Quadri. It was during that time he was a able to get a place of his own and things started working out for him.

On his experience working with people in the Yoruba movie industry, Tito said, “When I came into the Yoruba and I was writing scripts, they won't even accept these scripts. It was Tunji Bamishigbin that called me and said 'I heard people gossip you here and there. Your scripts are too grammatical. The Yoruba people do not write scripts like that. You are writing for soap opera. You are writing for….' Because Tunji has read my scripts a couple of times and he said they are wonderful. He told me that if I want to move with people, I should understand their level and operate at their level and I have come to know that now. I write my scripts in simple English as long as they can understand and pass the message, even if it is not too perfect. As long as any pedestal reader can pick it and read, they are satisfied with it and that is what I have been doing and it has been working very well for me. You don't exhibit professionalism when you are writing scripts except you are writing for few producers like Tade Ogidan, Jimmy Odumosu, Ogunbanwo and a few others. But if you want to write for these pedestal people, if you do not simplify it, they will not accept it. So when they now taught me how to write their scripts, I was now like, so it is as simple as this and ever since I have been writing and the money has been coming.”

Today, he is happily married to Taiwo Harrison with two lovely kids, Fathia and Salam Harrison. But his only regret is that providence did not find him on time and he had not been lucky to get honest hearted people to work with. He said, “Yes, my regret is that providence did not know me on time and that all my life, I have not been very fortunate to meet very trustworthy people. I hate people who are not sincere. I have been very, very unlucky in my voyage towards life. It has been one area trying to see if you can make life out of this place and you see them wanting to swindle you. Sometimes I see people who want to swindle me, I just pay deaf ears. I was worried. At a time, I had to tell producers to just allow me to be working for them. I will tell them not to pay me because I just want to have the sense of productivity, that I can be productive to anybody. I did that so that I can be engaged and have a psychological sense of engagement because nobody wants you around and there is this kind of reprehension, nobody is calling you because you are not a star.”

His advice for upcoming artists, “I will tell them not to be desperate because desperation has never worked for anybody. It will either make you step on toes or take your life. I always tell people I waited for my time and it is after over 20 years that God is now making me reap the fruit of my labour. Everybody has an appointed time with God, so they should wait for their time. Although I do not pray that anybody goes through what I went through but if you believe so much in the miracle and wonder of God, you will get there in no time. So patience is the watchword. Don't be desperate, be patient and be calculative and don't always lock yourself in the shell, always be productive. Always put in your intellectual property into any sphere you meet yourself, your knowledge might discover you.”