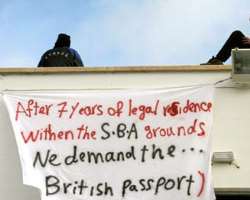 As a large group of illegal immigrants and their supporters hold a rally in London's Trafalgar Square in support of their demand to break British immigration law at will, a new report has revealed the £1 trillion cost of granting amnesty to the law-breaking invaders.

According to respected independent think tank Migrationwatch UK, the extra burden on the public purse is the “hidden cost” of unlawful migrants. This includes the cost of them settling and starting families and the drain on the benefits system - all of which works out at around £1 million per person.

A similar drain could be caused by asylum seekers who are successful in their claims and allowed to settle here lawfully, the report said, meaning that British taxpayers would be presented with an eventual bill of up to £1 trillion if an amnesty was granted.

The pro-amnesty group “Strangers into Citizens” is holding a rally today calling for the “regularisation of illegal immigrants” - in other words, the granting of an amnesty for all those who have broken immigration law. This call has been supported by Conservative Party bigwig and London mayor Boris Johnson.

Migrationwatch UK chairman Sir Andrew Green said: “Our calculations show the numbers are truly enormous, adding an unacceptable - and entirely unnecessary - burden to the nation's balance sheet at a time when Boris Johnson himself is writing about 'the horrific state of the nation's finances'.”

Estimates of the number of illegal immigrants range from half a million to a million, meaning, based on the research, they would cost the country up to £1 trillion. The Migrationwatch research was based on an illegal immigrant being granted asylum at the age of 25, then earning a minimum wage and going on to have a family with two children, not having a pension and remaining in private rented accommodation.

It estimates that over the course of their lifetime, the family will cost the public on average £1 million in handouts such as housing benefit, child benefits and pension credit after income tax and national insurance payments are deducted.

The paper said the figures are equally applicable to the thousands who are granted asylum each year. It accepts that some immigrants would earn above the minimum wage or not marry but equally others may be unemployed or have more than two children.

Amnesties in countries such as Spain and Italy have resulted in more illegal immigrants each time around suggesting the policy encourages trafficking rather than deterring it.

Sir Andrew added: “It is clear that not only is rewarding illegal behaviour wrong in principle, but the experience of Spain and Italy shows conclusively that it encourages even more illegal immigration in anticipation of future amnesties. This is a ridiculous proposal which is bound to increase illegal immigration rather than reduce it. It is also a shocking waste of public money at a time when we can least afford it.”

Matthew Elliott, Chief Executive of the TaxPayers' Alliance, said: “An amnesty for illegal migrants would be unjust and hugely expensive. There is no reason why someone who has broken British law by illegally coming here should suddenly be given access to taxpayers' money and public services.

“As well as landing us with a huge bill, an amnesty would simply send the message out that Britain is somewhere that will let you off if you illegally immigrate, and that will increase the number of people trying it.”

The Immigration Invasion: How Third World Immigration is Destroying the First World and What Must be Done to Stop It

By Arthur Kemp. A shocking book detailing the full extent of the Third World immigration wave which is swamping the Western World.

Using the latest numbers and projections, it explains why Third World immigration will destroy the First World, with individual chapters on Britain, Europe, Russia, Canada, the USA, Australia and New Zealand. Shows that, if left unchecked, the First World will be overrun within the next 50 years.