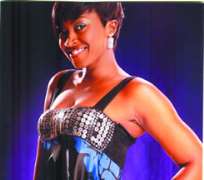 Kate Henshaw started out as a model back in the mid nineties. Her first television commercial for shield deodorant launched her modeling career. She played the role of Onome in the movie “When the Sun Sets” her first acting job. And ever since then, Kate has been going from one movie set to another. Kate Henshaw Nuttal in her own words.

BACKGROUND
My name is Kate Henshaw Nuttal. I was born in Lagos. My parents are from Cross River State. My dad is from Henshaw town. I am the first child, I have two brothers and a sister My dad was a ticketing agent with Pan American Airlines. .Growing up was fun we lived in Moshalasi area of Mushim. I used to go from there to Saint Mary's Private School Broad Street Ajele, which was my primary school. I later left Lagos for my secondary school education at Federal Girls College Calabar. From there I went for remedial studies at the University Of Calabar for one year. From there to School of Medical Laboratories Sciences LUTH . where I majored as a medical micro-biologist.

ON MODELLING
I started modeling after I had transferred from University Of Calabar to University Of Lagos to do my one year general studies. I was in University Of Lagos for one year before I moved into LUTH Idi-Araba. I did my first television commercial in 1994. It was for Shield Deodorant. I did some modeling jobs for Limca, some calendar jobs and I also worked as a runaway model for some fashion designers. And of course when you are modeling you get to meet a lot of people on the job and when you go for casting. And it was at one of those castings that I met the late J.T. Tom West. And he was the one who invited me to my first movie audition.

ON ACTING
The audition was for the movie “When The Sun Sets”. I got a role in the movie and that was how my career in acting started. It was my role in the movie that won me The Best Upcoming Actress in 1996 at the movies award. Back then a lot of time were spent on producing a movie. We had rehearsals the cast members get to know each other form a bond. We even had cast parties. Unlike now when you just get your script en-route to the location and then once you get there you start shooting. There is no real bonding it's left for you to depend on your talent. There are no rehearsals these days. But the danger which I noticed quickly back then is that producers tend to stereotype actors. If you are good at crying, you will cry in almost all your roles. And I don't think an actor should be box into playing the same character in different movies. An actor should be able to play varying roles.. They don't really give you room to explore your potentials. Playing one character limits you at the end of the day. I don't like that.

ON SEX FOR ROLES
I have never been offered a role in exchange for sex.. I have never been exposed to such a situation. If I was going to experience a thing like that, it would have been on my first acting break. I got that purely on merit. The director insisted it was me he wanted for the role. Because he wanted a new face. And after that the jobs just kept coming. Besides sexual harassment is not restricted to the entertainment industry alone. It's every profession. And the way you present yourself also.

A young girl once approached me, she wanted me to help her get into a production I was in. I spoke to the producer to try her out. We were looking for somebody to play a minor role. He promised to audition her for the part. I don't want to mention the producer's name. But the girl later came back to me and said the producer actually wanted to take her out. I was surprised because I wonder what that's got to do with the script. And because she refused she did not get the part. It happens.
Some of these girls make themselves target for such directors and producers. A lot of them want to be a star. Especially the young girls. I get a lot of e-mails and text messages from some of them saying they want to be a star.

They don't say I want to act or that they have the natural talent for acting They just want to be a star overnight. And if you come in with that mind set, that means you are ready to do whatever it takes to get there. I believe one's work should speak for one. It's not about wearing right clothes and make-up and been snapped by paparazzi all the time. It's about what you bring to the table. What image do you have on set and off set. Do you have something upstairs or is it all about bottom power.

ON NEGATIVE STORIES
A lot of negative stories have been published about me. But the most negative story I ever read about me was that I was having an affair with Fred Amata. And that my marriage has hit the rocks. The story was published by a soft-sell magazine. That was the worst of them all. Before the story was published one of the reporters of the soft-sell magazine had called me on the phone to say she was going to publish an adultery story.

I tried to explain to her that there was no truth in that story but she threatened to publish the story if I don't give her money. And I said I wasn't going to give her any money that she can go ahead and publish whatever. I never thought the story was going to be published. So when I saw the story I became so angry. I had to report to the police. There was where everything was sorted out, at the panti police station in ebute-metta Lagos. The magazine later published a small rejoinder, but that was okay by me. Even if it was just one line. I don't know what led to that story. My husband and I were together and still together. That story really got my husband angry. Because when we were about to get married Fred Amata's mother was one of the people I introduced to my husband. I knew Fred's mother way back. My husband gets angry when he reads negative stories about me. I just tell him it's the profession I find myself. And he knows too well that I won't stop acting, so he knows better than to tell me to stop.

ON NOLLYWOOD
Nollywood for me should have moved out of it's baby state to a mature state a while back. Yes it has a lot of appeal for people living African, and Africans in diaspora. We have not step on the world stage per say. A lot of Bollywood actors have crossed to Hollywood. Some of them are working in British productions. We have excellent talents here. At least I can pick ten actors from Nolywood that can fit into any international production.

ON NUDE SCENE
I can't do a nude scene. I don't see the need for it. Nigerians will not even like it. It's just a personal decision. My husband have no problems about me playing love scene. I have done quiet a lot since I got married . Love scenes comes with the job.

ON DREAMS
I never dreamt of becoming an actress as a young girl. I wanted to become a doctor so I can help to care for people. Treat people make them fell better. I guess I am doing that in a different way. A lot of people send me e-mails and text that my movies help put smile on their faces. And for people who have had a stressful day my movies help them to relax.

ON LOVE ADVANCES
When it comes I just smile. I try to be nice in a firm way. Not too brash or too harsh. And if the advances continues I just ignore the person.