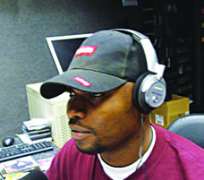 Since pitching his tent with the Victoria Island, Lagos-based pidgin English radio station, Wazobia FM (95.1) as an On Air Personality (OAP), Steve Onu, aka, Yaw has warmed his way into the hearts of many radio listeners in Lagos and neighbouring states.

Interestingly, the popular anchor of Make Una Wake, the morning show between 6am to 12noon, who recently bagged two awards including, City People Awards and Mode Men Awards for Best On Air Personality is just one year on the job.
Yaw beat other contenders for the awards including, American born Inspiration FM OAP, Dan Foster and Rhythm FM's Wild Child.

As if to justify his popularity among Lagosians, the Theatre Arts graduate of the Lagos State University, Ojo (LASU), was greeted with shouts of 'Yaw' by fans as he cruised in his black Nissan Xterra Jeep with customized plate number Yaw 2 into a fast food outlet within the National Arts Theatre for this interview.

Onu, who also combines his job with stage acting, MC and voice over, in this interview unabashedly spoke about his poor background, his job as an entertainer and how he copes with female fans among other issues.

Talking about my past
There is nothing wrong with the past because it is past. As a student, if one fails Mathematics and today he does very well in other subjects like the English language or Biology, does that make one a dullard? No, I don't think so. I don't care about what anybody feels about my past, I will tell you my past for you to know.

Before Wazobia FM
All that time I have been with the BBC. After that, I acted in a couple of TV drama such as, Twilight Zone and Flatmates. I was also involved with others, such as Dear Mother and Fuji House of Commotion. I was constantly featuring in different events at the MUSON Centre doing stage productions. Really, it wasn't an overnight thing, I have been there waiting for my time to shine. That is the mistake lot of people make. I also compere and do a whole lot of other things.

My background and my status
Anything I say on radio, I always recall my upbringing to buttress that point. Because there is always one experience or the other that will be relevant to the point, which I am trying to make, I always like to use it encourage people by saying 'look men, don't think it is the end of the world'. I have gone through what I went through in the past and by God's grace, I am where I am today. That is where I get my major materials for the show.

How I became a broadcaster
I went to the station with a friend, Bunmi Davies to see Mr Ibrahim Abubakar and incidentally, during our conversation, Abubakar said they want to set up a pidgin radio station. I then told Bunmi that I wouldn't mind taking up a job with the station. It took me about three to four months to write my C.V because I have never written any before. Eventually, I was able to write one. On the day of the interview, I just wore a shirt and a pair of jeans with a cap, which made me look very odd. The other applicants were all in suit and tie looking very corporate. But I ended up getting the job. They called us in one after the other and you drop whatever you want to drop.

Acting on stage with Koffi
The play was intended to show the other part of me that most of my radio fans don't know. Most people know me just as an OAP but the real me comes out when I am on stage. They saw it and I am sure they enjoyed it. We did two shows and we recorded full house in both shows. I hope to do it better in July. I studied Drama and so that is the main thrust of the show, we just added a little comedy and music for variety.

Humility as a virtue
My mother always reminds me that without the people, you are nobody. If tomorrow, you and every other person stop listening to Wazobia FM, then who is Yaw. I will be nobody. So I have no choice than to remain humble. As a person, it is not even in my personality because I wasn't raised that way although, some people test one's patience by going to the extreme. Somebody see me one day and he just slap me for back and began shouting 'yes, na you dey talk for radio'. I was really mad. Although, I was angry a bit yet I couldn't do anything about it. Another instance, someone saw me and just removed my cap and began to hit it hard on my head. In such situations, if one should flare up, they would say one is proud or something. But I just try to be myself and remain calm in any situation.

Most interesting part of my job
I am just who I am. My brother, na like dat wey I be na im I be. Whatever you hear me say on radio is what I say on a good day. The good thing is that the management allows me to be who I intend to be. They have not told me what to do or how to do it, and I think that is what is making the programme sell.

Coping with ladies
Really, I don't know whether I am getting attentions. But even before I became a presenter, ladies have always liked me. Even if you are good in only Mathematics or English language, ladies will surely like you, it is as natural as that. I just try as much as possible to keep them at arms length.

Is Yaw married?
(laughs) Any other question? We dey, we dey kakaraka.

But people say you are not yet married.
(more laughs) In short, I don't really know whether I am unmarried or not except as I dey hear am for your mouth.

A lot of young ladies will be reading this…
Dem wan marry me? Anybody who wan marry me, I dey o make una come marry!

Music industry in Nigeria
Our musicians are trying but at the same time, I am worried that our kids are being unduly exposed to a lot of rubbish. If they don't talk about sex, they think it won't sell. We have a lot of people fooling themselves around that they are musicians yet they don't have anything to offer. But, I will say that we are still growing. I think we still have quite a few good materials out there?

Do you reject musical CDs?
Anyway, I am not in the library department that handles such things but they reject a lot of CDs. I don't have a say, my own is just to collect materials from the library whenever I need it. The library controls everything that has to do with musical materials.

Daily routine
I wake up in the morning around 5am, pray and prepare myself for the show. I hit the studio between 5:30 am and 5:45am and then I go on air from 6am and round off by 12noon. I still stay around to do some production jobs and I later leave office by 1pm. From there, I am on my own and every day I have one or two things to do outside of my radio job such as voice over and commercials among others.

Rising popularity
Well, I give God the glory for that. But I still have several people, whom I respect such as, Basket Mouth, Ali Baba, Koffi, my friend and so many others. People say I am funny but that is just me because everything about me is fun. I like making people happy.

From Grass to grace
I will say life is just okay at least from hawking 'ice water' not sachet water during traffic in those days to riding a car now. So, I just give God the glory for the good things he has done for me. I won't say it is little, especially when I compared it to where I am coming from.

What are your plans for the future?
I never believed I would be an OAP, I take my time to achieve one thing at a time. Initially, it was home video, next it was stage, then TV and now radio. Whatever comes my way, I take. God is the author and finisher of my faith. I leave everything to God.

How old is Yaw?
Yaw is in his 30s and still has many things to achieve.

To your fans
I say a big thank you to Lagosians and indeed Nigerians, who have been voting for me for awards. I have received about four or five awards so far, including Best On Air Personality for Mode Men Awards and City People Awards among others. I am just one year on the job. I also won an award organized by Opa Williams for Best TV Actor (Comic) and when I used to do stage productions, I also won an award.