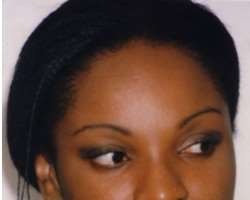 After several years of bestriding the Nigerian movie industry as the Number One female actress, Liz Benson has finally put an end to her exploits...

in the world of make-believe and has taken up the task of a full missionary. In this interview, she tells JULIUS TOBA about her new identity as a warrior in the Lord's army. Excerpts:

How did you metamorphose from a top actress to a preacher of the word?

This has been the same question from people. But I thank God because I have come to understand that everyone is positioned by God on planet earth to fulfill a particular purpose. Also, it is the willingness of an individual to be able to work in it that gets you started. In fact, I can't even begin to explain, but I must confess that God Himself has a way of getting our attention. I tell every child of God that there is a mark on them. This means you can run, but you can't hide like David said in the Bible that where can I run to? That even if I go under the mountain, that You (God) are there. So, from my own example, I know that a man can not run away from God. Everywhere a man finds himself, he should cultivate the act of asking himself that, “God, what is my purpose of being here?” No matter how small you think you are, ask God. That is one thing I have come to discover. That's it. I can just begin to really tell you oh! I sat down one day and said I wanted to become a preacher. No. All I wanted was to serve God and to be closer to Him than a mere Christian. You know, I have had a Christian background. I was brought up in a Christian family but it was not enough. I have also realised that it is not enough to be a good person; it is all about Jesus Christ. It is about being born again in the true sense of it. It is about being useful in the kingdom of God. There is so much going on now, and then when you come closer to God you will become a vessel in His hand. Even in the little you can do, God will still strengthen you to do more.

You truly sound more of a born-again Christian now

I actually gave my life to Christ in 1996 when I was attending a revival assembly in Lagos. I only answered the altar call at that time with a feeling that God had done so much in my career as an actress because then I was at the peak of my career. You know, it was like everything was happening fine for me. Aside the TV and stage productions, there was Glamour Girls and another soap opera contract too. I just came out to say thank you God and that I received Him as my Jesus and saviour. But you know what? It is the beginning for every Christian when you give your life to Christ. That is the beginning of the work you are seeing. Being born-again is the first step. When Holy Spirit begins to deal with you, then you get the conviction and there will be no turning back. When you put your hands on the plough you can't look back, because without that conviction you will always turn around.

Any comparison between your acting personality and now?

He who is fulfilling in the performing act industry is worth fulfilling in evangelism. But the greatest fulfillment comes when you know your purpose in life. And at times when you are doing things like you rightly said or you are saying the financial level has increased. Sometimes we say oh! I have got it, I have got there and all that but really what are you doing with the lives of the people around you? When you positively impact on the lives of the people around you, something really different begins to manifest there. It is just a supernatural birth of what good God has deposited in us at each level. So, my acting days were really fulfilling for me, but not as fulfilling as now knowing full well that I am a vessel in the hand of the most high God. What else can I ask for? It is such a wonderful privilege. I can not just begin to really comprehend how God planned it. But I tell you this, that my being in the movie industry, the fame or whatever one might have got from there was not for me, not for my family but for the advancement of God's work. So my fulfillment is complete and I pray God to give me the strength and grant me the grace to continue in His vineyard.

Are you implying that you also fulfilled the will of God while in the movie industry?

Yes, that is it. All you need to do is to work within His will and He makes ways for you. But if you don't, you may get your fingers burnt in the process. It is just a way of thanking Him for all He had done in your life. I believe all I was doing then was following His direction. Like the book of Deuteronomy 32, 10 says … “I led him and instructed him”. So such a thing can happen.

What message were you particularly given to share in your evangelism?

It is important to tell you that I had started evangelism before I was ordained. I started evangelizing almost like a mad woman. That was in April 2006 at the Christian Central Chapel, Calabar by Evangelist (Dr) Emma Isong. Like I said, I had started evangelising already and on the day I was ordained, God was perfecting me to be finally announced. He did not want me to go round like a mad woman again. I used to stand on the road calling people preaching to them, going to mechanic workshop talking to people about God. I visited everywhere I could to preach the word. I think he wanted me to say okay this is who I am, you understand. At times, I marvel at what God could do. God has given me message of hope and salvation to his people. Just towards the end of last year, He spoke to me clearly and He said “do not deviate, for I am coming sooner than expected”. Again, two weeks ago, I was in United Kingdom. As I woke up to pray and when I went back to sleep, I heard him again saying “ go into the world, preach like never before. I am coming sooner than expected”. He was so clear and the sound was almost like vibrating in my ears. I decided to wake up again and continue worshiping Him. I am appreciative of His mercies because it could not be someone except me who is from the core of the movie world to carry this great message. God does not just do things because He wants to do it. Sometimes, we think we are just positioned there to have fun and all that. No, it is not so. For instance, Esther was positioned in the palace for posterity. The posterity was for the deliverance of the Jews. So, it was not for her to wine and dine there. So often times, when we are positioned in certain places, we don't understand that's why. Some will say, 'oh! God has given me this and that, but what are they using it for?' The message is clear: To set the captives free, preach His word, to turn around, humble myself and make wake-up call towards the coming of the lord.

Are there plans to establish a church of your own?

No. I don't intend to. I have said it times and times again. I am saying that because up till now that I speak to you I have not got any inclination from Him on that. He has not told me to go establish a church of my own. I have only been sent to preach the gospel.

What are the challenges now?

For me, I would say that the acting industry was a proper training ground for what I am doing now. I think I have got all the trainings, all the shock-absorbers to be able to face any challenge. Don't forget that my God is a faithful and merciful God too. He said: “I will not put on you that which you can not carry. He is the potter; He knows how he molded me. He knows how strong I am, though I refuse to be fragile. I do pray for strength every time and I am sure of it. I could only do my best according to His own grace.

Do you see the strength and the grace to carry on as the challenges ahead?

Yes, you could call it a challenge if you want to, but I think 100 percent submission to the Holy Spirit and you constantly ask for grace to stand and work in His way. You need His grace, because His grace is sufficient for many who are willing to humble themselves before Him.

What is your message to your fans who still believe in you?

My message is that things have changed. Liz Benson of those days is not the one you know now. They should give their lives to Christ just like I did. I want to tell young boys and girls who were thrilled by my talent in the movie industry in those days that they can still gain much more from this message which God has given me to the world that He is coming soon.