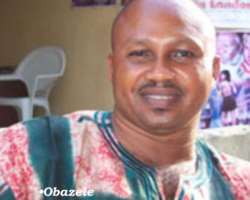 AT a time like this when local and global economy are taking a plunge, the services of the arts and entertainment sector becomes crucial. The... nation, in particular, needs the sector to help rejuvenate hope of better time and faith in the land's ability to ultimately come out of the woods.

This is the thinking of President of the Association of Nigeria Movie Producers (AMP), Paul Obazele. But in a situation where the country tends to exploit and wreck the filmmakers' investments without propping them, the possibility of the land exploring this opportunity appears remote.

In an interview with the Nigerian Compass, the artiste also offered a window into his own world of creativity. He used his story to illustrate how unwavering commitment to the creative impulse, even amid denials and want as well as a desire to use art to solve society's problems, can launch a man from grass to grace.

Interestingly, the popular actor and helmsman of Nigerian film producers, was at one-time a child prodigy and top model. He came into Nollywood by happenstance though at the age of three when some of his peers were still clinging to their mothers, he had already been a familiar face in television studio.

He said, “I started going into studio at age three. My father was that kind of person that would not want any of his children to go into broadcasting. His singular defence was that journalists and broadcasters do not maintain stable families as they never had the time to spend with their families.

“Therefore, what he did was to castrate our education, he made sure that we studied something outside of broadcasting. He did it perfectly well. But unfortunately, one cannot live out of one's calling and one cannot leave out what one has seen. It is an in-built thing. It (working in the film industry) is in my blood stream.”

Somewhat, an establishment of the fact that he is within his line of calling, today, he is one of the frontline film producers as well as a director in the film industry. The handsome filmmaker who combines acting, and directing noted the only way he can make an impact in the movie industry is to produce quality films that will bring change.

“I have had to produce my own movies. I had to produce movies for people. I had to direct movies. And, I ran away from those things. But I just found out that the only way I could make a change is to operate in that mirror (producing films). So when I looked at myself and felt I had to make a change, it occurred to me that the only way I can make that impact is to produce quality films. Actually I bring out my own resources to do that. And when I found out that the thing was not going the way I wanted it, I decided to direct. Like we know, in (film) production, the director has the final say. I had to do those things and by God's grace, it has actually paid off.

“One of the jobs I directed and produced, Walls Have Ears, was a revelation and prediction. In it I dwelt on a situation where an average Nigerian policeman shot (bus) conductors and drivers just because of N20. I shot the film some years before the rampage started and I remember when I went to the Censorship Board, they didn't find it funny. But I told them that it was what I have seen and it was like a prediction and when it happened, I remember somebody wrote me from the Censorship Board asking: “Are you a soothsayer?”

“He said it was happening. I said that was the creative mind at work. Because I had ran into situations where I saw policemen at check points losing their cool...

“Today, Walls Have Ears is one of the biggest films I have produced and directed. Infinity Merchants (a film sponsoring and marketing firm) told me congratulations. It is rare for a marketer in Nigeria to come and tell one, congratulations. He did and at the end of the day, he came, sat down in my house and opened a bottle of Moet. That was a success story. but my biggest regret was that I sold the film outrightly. I was scared. We got information that the film was to be impounded and we had to rush to release it and left the country immediately. He (the sponsor) went to Netherlands to sit down. And I faced it. I was harassed by the police. I stood my grounds. I felt complete because the average artiste is that one that makes an impact and the society reacts. The society reacted and I had to, like the lizard, beat my hand on my chest to congratulate myself.”

Obazele is bitter that the average filmmaker has been exploited in the country for a long time. Citing an instance in Walls Have Ears, which he said he spent N1.5million to produce. “That was my money. There was no bank that gave me anything. When I did Shadow Of Death, the same thing. I used my money. You find out that you bring out all these resources and there is no backup from the federal government, state government or the local government. The Copyright Commission is not even doing enough for you. The Nigerian Police is not doing anything. You just find out that people plunder your intellectual rights and you complain, somebody comes out there – either he's feigning ignorance to say that they are making your intellectual work popular or actually he does not know. Piracy is a crime against society.

“Nigeria is great. But the greatness is largely because a group of people who had no opportunity but were keen on creating opportunities for themselves and others. I am talking of a group of people who had a vision that they must take their destiny in their own hands; people who told themselves: we can reposition our selves and make ourselves useful to the society that is so harsh, a society that is so complaisant about her citizens. The average Nigerian filmmaker has not been able to realise his capital investment in the industry. The average filmmaker that is so weakend despite his being so strong is taking his properties into a nylon bag and walking back to his village. These are the people who sold their family land, who sold houses that belong to their parents to put into a business which they know is vibrant, that can sustain them that can uplift the nation and they are being denied their profit. Some people are feeding fat on what others have done. It is sad!”

Obazele revealed that in the history of world recession everything goes down, while entertainment goes up.

His words: “This is the reason we must put everybody in the right frame of mind, now is the time that our thought must be very active to move the industry ahead.