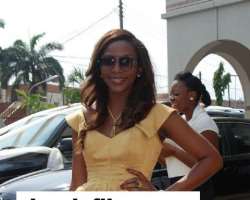 Multiple award-winning actress, Genevieve Nnaji, has stormed location for a flick directed by one of Nigeria's youngest movie directors, Dotun Falope a.k.a. TK.

Genevieve, who has been screening scripts that come her way, noted that her decision to take a major role in the yet-to-be-titled movie is because it is a unique story, and it is being handled by one of the most promising directors in Nigeria.

http://nollywoodgists.com gathered that the movie, which is currently being shot in Lekki, features Genevieve as the only star actress.

Defending this decision, TK said it is targeted at discovering new talents that will eventually take over from the current crop of stars in the industry.

“But the presence of Genevieve, who is apparently the best actress of the moment, will be a good source of inspiration to the younger ones,” TK said.

According to Genevieve, “I decided to take part in the job because when I saw the script, it was a good one. The calibre of young and talented persons involved in it is also encouraging.”