Julius Agu gets the boot! 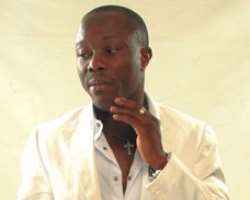 Tafawa Balewa Cresent, Surulere, Lagos, is about to lose one of its most prominent resident.

It is no other person than Julius De Genius Agu. According to feelers reaching http://nollywoodgists.com, after close to a decade of occupying his office, a property located on the said street, his landlord has finally given him the boot in a most unceremonious manner!

Last week when http://nollywoodgists.com paid him a visit, it was obvious that he was moving house. His once organised office was turned upside down with furniture and household properties strewn all over the place. However, enquiries revealed that the act was far away in Abuja.

Unconfirmed reports indicate that but for improper handling, he would still be occupying the office.

Close pals disclosed that trouble began when issues of rent arose. Both parties failed to reach a compromise. Consequently, the landlord allegedly sold the property behind the comedian's back and the new landlord gave the rib cracker an ultimatum to move or…
Meanwhile, the buzz in town is that he is relocating his office to his multi-million Naira estate in upscale Lekki, Lagos.

Julius Agwu hit limelight in the late 1990s with his unique brand of comedy after he graduated from the University of Port Harcourt with a degree in Theatre Arts. Crack Ya Ribs, his brain-child has become a household name. Until recently, he was among the industry's most eligible bachelors but he tied the knot in a society wedding last year that attracted the crème de la crème of the society.