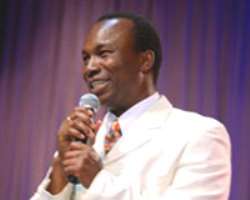 Flambouyant Nigerian pastor and apparently Ukraine's most prominent Pentecostal leader, Sunday Adelaja, has been indicted on fraud charges. Pastor Adelaja is the senior pastor of the largest church in the Ukraine, "The Embassy of the Blessed Kingdom of God for All Nations, Kiev."

The Ukrainian Interior Ministry has accused him of defrauding citizens of money, the ministry's Department for Media Liaison and International Activity said. We gathered that the amount is over $100m.

"The investigator has brought charges against Nigerian citizen Sunday Adelaja, who permanently resides in Ukraine and is a senior pastor at the Embassy of God church. The charges were brought under Part 4, Article 190 of the Criminal Code of Ukraine (the embezzlement of funds in very large amounts via fraud)," the ministry said.

Last month, several church members went to authorities saying they were unable to recover the money they invested, which left many of them bankrupt. Police later arrested one of King's Capital leaders, Aleksandr Bandurchenko, on suspicion of fraud.

Speculation about Adelaja's involvement with King's Capital grew after reports surfaced that he was part of a bank in Nigeria known as GS Microfinance Bank Limited. Some speculated that Adelaja, a native of Nigeria, invested funds from King's Capital in the African bank and planned to leave the country.

Adelaja, however, said those accusations are unfounded. He said he has never been involved with King's Capital but denied that it is a Ponzi scheme, which uses later investments to pay dividends to earlier investors.

He said King's Capital was a legitimate business that failed under the pressure of the global financial crisis. He said because the company poured most of the investment capital into real estate, which decreased in value, it has been unable to pay investors.

"When the economic crisis came, all the real estate is no more selling. The land is enough to pay back the money owed. ... The problem is ... everything is stopped in the country--nothing is selling now in Ukraine,'' he said.

Adelaja said Interior Affairs Minister Yurii Lutsenko accused the church of involvement because he wants to undermine the evangelical movement in Ukraine. With several thousand members across the nation, God's Embassy is one of the most influential congregations in Ukraine.

"(Lutsenko) is in a very bad situation," Adelaja said. "He's got to prove now that (King's Capital) is a pyramid scheme, but he cannot."

Adelaja said he never encouraged his church members to invest in the company and cautioned them to invest in businesses that offer insurance. "Of course ... if you invest with insurance you get less percentage," he said. "What happened was many people said they didn't need insurance because the (King's Capital leaders) were Christians."

He acknowledged being affiliated with GS Microfinance, but said he invested his name and influence in the bank, not millions of dollars. He said GS Microfinance was formed to give small loans to poor Nigerians as a way of lifting them out of poverty. "It's not about what you can get, but the vision of the program is to elevate and get as many people out of poverty as possible," Adelaja said. "That is one of my lifetime passions ... because I grew up in poverty."

Although Adelaja has repeatedly denied any involvement in King's Capital, which has not officially been deemed a fraudulent business, Pentecostal and charismatic leaders across Ukraine are calling on him to repent, saying they heard him encourage church members to invest in the company on several occasions.

"He was not a president of this company, but he was the No. 1 spiritual leader, and he told them what they have to do," said Bishop M. S.Panochko, leader of the All-Ukrainian Union of Pentecostal Churches of Evangelical Faith, which is comprised of 1,500 churches across the nation. "He can do everything to tell them that he is not involved, but all the leaders have a lot of facts, and we have a lot of video of when he was pushing people, and he encouraged people to invest in this business."

Panochko was one of 10 leaders who met with Adelaja last Tuesday to confront him about his alleged support of King's Capital and the negative impact some of his actions have had on the evangelical church in Ukraine.

The Pentecostal bishops, who together represent more than 2,500 congregations, listed seven items of concern and said Adelaja has a pattern of making exaggerated statements. They pointed particularly to his alleged claim that he led the 2004 Orange Revolution--when Ukrainian voters protested a presidential election many considered fraudulent--and his reports that God's Embassy has 100,000 members across the nation. The bishops say those and other statements are untrue.

After the meeting, Adelaja issued a statement saying he did not organize the Orange Revolution, though his congregation participated in the demonstrations. He also asked forgiveness for the negative impact the King's Capital scandal has had on Ukrainian churches, but he added that he did not personally have any involvement in the company.

Moscow-based pastor Rick Renner, founder of the Good News Association of Churches and Ministries for Russia, Latvia and Ukraine, said Adelaja's claims are hurting Christians in the former Soviet Union.

If convicted, Adelaja may spend up to 12 years in imprisonment, according to Part 4, Article 190 of the Criminal Code of Ukraine.