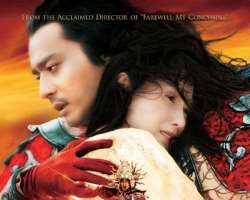 was born when the Kliegs were rarely used; dim lights were all we made do with. Cameras were being experimented with and stories were primeval; narrated mainly at moonlight at family compounds and the village square. At age 10, the screens blazed with Indian folklore produced as movies. The magic box was for the privileged few, a social class very few Nigerians belonged to in the eighties. Around drawn apart curtains, slightly ajar doors young avid viewers jostled, craning their lithe necks for a vantage view of these Indian spectacles. In no time movies such as MARD, THE BURNING TRAIN, THE PROMISE, etc become household names. Everyone suddenly wanted to leap off buildings like their Indian heroes and sing boy-girl ballads

Years went on and TV sets became more affordable and accessible. The technology also moved on; cinemas gave way to video tapes, then laser disks, compacts and DVD's. Nowadays you can even watch a movie online in softcopy format.

But the ancient art of storytelling hasn't changed much, Bollywood-the Indian movie industry has grown in leaps and bounds- rivaled only by its American counterpart, Hollywood has attracted worldwide fame and attention. Only recently at the American Academy Awards-an India movie-Slumdog Millionaire swept the park clean-carting 8 awards. It had also received several awards at the British movie awards

In Africa, the Nollywood-Nigeria's movie industry is the most vibrant in the continent, churning out thousands of home videos yearly. Coincidentally Nollywood's growth pattern has been likened to the Indians; low budget movies, easy to predict plots and large peer followership. A recent report by an international movie group suggested that the rest of Africa could take lessons from the Nigerian movie industry

But Nollwood has its blacklegs; its proponents argue that the industry needs time to grow. But its worst critics accuse the industry of paying no attention to professionalism, loosely wound scripts and poor delivery by actors. The haphazard structure of professional bodies laying claim to the regulatory of the industry's professional only add more gnarled twists to an already complicated story.

“Mise en scene” is the parent French word for “film” simply put; cinematic events should speak more in pictorial form such that your audience can grasp the meaning of the essence without dialogue.This is one line of knowledge that seems incomprehensible to most Africa Directors. According to Steve Adesemoye; the essence of film is in its picture and its ability to communicate. Therefore from the synopsis of a story to the shooting script; a director should make sure that his events communicate more in pictures than in words.

One more thing; more African directors should utilize the power of a story board to give an artistic feel of the scene before it is shot.All of these equals more time, and this is where editing is important. So here's the moral lesson; a little patience whilst editing, mixed with all these aforementioned principles topped with some creativity should get our movies off the rocks.

We can bring the magic to the Nigerian box by telling the stories the African way, pure, unbridled and pulsating African folklore that could one day epitomize Ajegunle in the shadow of Danny Boyle's Mumbai. Then I wouldn't mind joining in the chorus “we love Ajegunle”