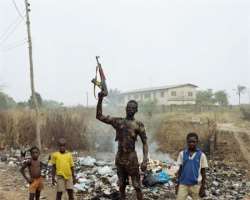 Before launching into my topic for today, let me correct some errors in previous columns. In “The Footpath Mentality” (27 Jan 09) I wrongly blamed Lagos state bureaucrats for selling off the parks, playgrounds and other open spaces in Festac. Festac was a federal housing estate, therefore the blame belonged to federal bureaucrats, who at the time were still in Lagos.

In “The Wazobians are Coming” (3 Mar 09) I said the south-east governors never made inter-state appointments. Wrong. Governor Ikedi Ohakim, who is doing outstanding work in Imo, has two senior appointees from out of state.

In “This One is for Nollywood” (23 Dec 08) I commended our motion picture industry for reducing violence in their movies. It turns out that I spoke too soon. I have subsequently viewed a succession of movies which drive me to a rather different conclusion: Nollywood is busy glamorizing violence.

Nollywood is heading down a path which is bound to bring this country to grief deeper than can be imagined. It is a path which the American original, Hollywood, has trod for the better part of a century, to the eternal grief of the American people.

To glamorize violence is to give out the impression that violence is a good thing, a thing that is normal and correct, a thing that is admirable, desirable, and worthy of imitation. This is done by focusing a great deal of close attention on violent acts (granting it plenty of film footage), and by presenting the men and women who commit violence as chic, cute, fashionable, glamorous, sexy, seductive, strong, powerful and superior.

It is not as if violence is new. Real life is full of it. Our folklore, and the folklore of the entire peoples of the world, has plenty of violence, wickedness and horror. The difference is in the sheer quantity, the intensity, the blood-dripping vividness and detail to which the movie audience is exposed.

Some people may be unaware, while some are aware but in denial—but the fact is that movies touch us all very deeply. Movies reach deep beyond our marrow into our very psyche and soul. Movies influence our behavior—when we let them, but even when we don't let them: their influence is often subliminal and unconscious. Humans are imitative animals. We observe how sophisticated women or tough guys speak and act, and before we know it we are taking cues from them, justifying thoughts and fantasies alien to our normal character,

modeling our words and acts after them, remaking ourselves ever so subtly in their image.

If this is how movies affect adults—or at least some adults—you can imagine what they do to children and young people who are involved in an active search for role models as they struggle to grow up.

To put it another way, the point at issue is the unprecedented and unequalled power of the modern audio-visual media to compel us—the entire world!—to experience everything to a degree that had never before been possible. Next to the gun (and all its “improvements” from machine guns to bombs to nuclear missiles), the moving picture is the most powerful (and, depending on how it is used, the most insidious) invention that mankind has been responsible for (or guilty of).

Guns compel submission and acceptance through physical force (violence) or the threat of force. The media (movies, TV, radio, newspapers, magazines and the internet) achieves the same goals through persuasion and propaganda—that is, by showing what is negative or evil in a positive and attractive light, persuading us that black is white and white is black, that what we know to be bad is good and what we know to be good is bad; by getting us to abandon our own point of view and accept the point of view of some other group, to turn our back on our own society and its values and embrace the values of a different society; to abandon our own judgment and accept the judgment of other people; to forget who we are altogether, throw away our pride, our self, our identity in favour of a foreign and alien identity and self. Such is the persuasive, propaganda power of the media.

To return to violence: Hollywood made violence in the media fashionable in America. What has been the result? What is likely to be the result if Nollywood insists on doing the same?

[To be continued. Next week: “Giving the people what they do not want.”]