DIANE OPUTA: ‘My husband is still close to his female staff’ 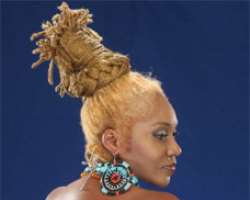 Diane Oputa, has surprised many people including her parents, by sticking to and surviving three decades of marriage to a man whose background and origin are different from hers. Something strong must have held the duo. We tried to find out the secret and ended up opening more pages of lady Di's (as she is commonly known) life.

Exerpts:
Background
My name Is Diane Oputa Nee Rogers. I was born in a South Carolina In the United States Of America I am the first child and I have one sister. When I was two years old my parents moved to new York. I lived in new York till I graduated from High School. I had a normal childhood I got involved in a lot of activities.

We lived in the project and to get us off the streets we did a lot of things to keep us occupied and active. And that in the long run added value to the things I do today. It was during that time that I realized that I have a natural flair for designing clothes. So my junior high school teacher recommended I be enrolled in the high school for fashion industries. The school allowed me to explore in to all different aspects of fashion. And eventually I settled for men tailoring. I was the only female in my class. Back then very few female are interested in designing male clothes.

And it was my classmates that gave me the nickname LadyDi and the name stuck with me. I later moved from New York to Boston where I continued with my fashion designing course. While in College I used to do odd jobs. I used to work in a hairdressing salon, I was very good at braiding. And that was where I met my husband. I started working when I was sixteen years old.

On how they met
I was in the salon one day when a limousine pulled up. And a man well dressed in suit with his hair relaxed and pulled back came out of the limousine. When we saw the limousine we actually thought it was some sheik from somewhere. He came in to the salon. After a while my boss came to me that the man that arrived in the limousine wanted my number and wanted to know if it was okay for him to call me. I said it was alrighr.

My boss had always wanted to hook me up with a man. And here was a well dressed man who drives around in limousine definitely he can afford to take me out. And I was looking for good time. He called and invited me to a party. I had heard about how Nigerians throw the coolest parties. So I was interested. But it turned out that it was a fake party. He told me where the party was be held, it was some remote area and I had no car. So he agreed to come pick me up to the party. When we got to the venue of place where the party was supposed to be held, It was just the two of us no party. He tricked me.

On dating
Before I met Charles I had never dated a Nigerian or a foreigner. My boyfriends were all American guys. Not for any particular reason. Is just that those were men that crossed my path. So when Charles invited me out, I decided to find out from a Nigerian woman that owned the apartment I was living in Boston. She was a very beautiful woman and lives in this beautiful apartment. She comes from a very wealthy family her name is Anne Okaro. When I told her about this Nigerian guy that was asking me out. We have heard a lot of stories about Nigerian men so I wanted to know what Nigerian men are like. It was after I had mentioned his name that she realized it was her cousin that I was talking about. She told me Charles was okay but he was a womanizer.

That I should get to know him. She later told me a lot of other things about him. So this helped the relationship. Because it sort of prepared me. We went out few times and he called me up a lot. We went through a lot of ups and downs during our courtship. Things I would not want to put on the pages of a newspaper. But he kept coming back. And most importantly we communicate. I am an aquarian we are giving and very forgiving. And we can accept so many things.

On coming to Nigeria
I was about 18years old when I met Charles. I later met his parents when they came to the States. They liked me and told me how I looked like a niece and that I have a figure of a Nigerian woman. So his parents invited me to Nigeria. I have never been to anywhere in Africa. But I am an adventurer so I was intrigued. Charles family are well to do. And I wanted to know more about the culture and the people. I wanted to experience more. I cried when the plane left kennedy Airport. I was leaving my parents and going to another country and that was overwhelming for me. But it was an exciting trip for me. I was well taken care of. I was supposed to stay for four weeks but I stayed for eight months before I went back to the States. And I came back again after four weeks in the States. A lot of things happened in between. I was in love and while I was here Charles lost his only sister. So I just became part of the family. After sometime I started asking myself questions.

Do I want to stay here? Can I adapt to the culture? And here I was living with a man that people around him considered me to be a wife. There I was so many things to think about Charles had been married before he already had four children and he was enjoying the fact that he is free. So I now decided to call him one day and asked what is it going to be. Yes I asked him to marry me. Because we were already living like a married couple and the only way I could continue living that way was for us to get married. And is either that or I move back to America. So is either he marries me or let me go. It was not a force situation there was no string attached. He was willing to make the sacrifice. Because he had been married before the thought of getting married again was not exciting to him. He felt I needed that piece of paper and if it was that important to me he decided to give it to me. In 1979 we went to the marriage Registry and got married. We had our first child Charles Alexandra in 1984. We had two other girls later.

On what has keept the marriage going
I think we are compatible in a lot of ways and not compatible in a lot of ways. The respect we have for each other, the love we have for each other and most especially the commitment we have made. Definitely we have faced a lot of challenges through the years. Because we are in the entertainment industry the challenges are a bit different from what normal couples face. Because we got to know each other well before we got married that sort of helped.

On the relationship
Initially I didn't know that Charles was the man I was going to spend the rest of my life with. I didn't know that I could stay this long in Nigeria. I don't think our relationship is extraordinary. Right now he lives in Abuja and he has been there for the last two years and I live here in lagos. He runs the office in Abuja I run the Lagos office.. So right now we have a long distance marriage. Many people will say that can't work but we have made that commitment to each other. He comes back forth and I go to Abuja when I want to. I am not ready to leave Lagos. I like living here. Living separately has it's own advantages and disadvantages. When you see each other the fire is rekindled. But I won't advice couples to live separately. But it works for us.

On charles and women
Those are some of the things you have to accept as a woman married to somebody in the entertainment industry. And who wants to remain relevant. He has to be seen as one of the boys. Whether he is one or not. It is the picture they want to paint. My husband likes to bring people close to him. And the women most especially always appear to be too close to him. My husband goes out with his staff, take them to nite clubs. And when you see beautiful women around a married man people think there is something going on.

A lot of times there is, but a lot of times too nothing is going on. If you are comfortable in your marriage and you trust your husband and he trusts you. Then you have to deal with and accept these things. I know with the industry where you get both negative and positive press. But I was not happy about reading about his affairs with other women in the papers. I know when to draw the line. I know it is not easy and a lot of women can't cope with what I cope with. A lot of these things would have scattered some marriages. But it can only happen when both of you don't communicate with, each other. Despite all the stuffs that were written about him and the women he worked with. My husband till today is still close to his female staff.