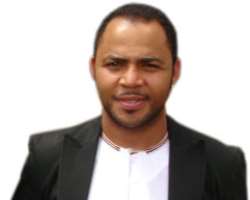 Actor, Ramsey Nouah needs little or no introduction to many people in Nigerian.

Many qualities have distinguished the mulatto, whose maternal grandmother christened Adetokunbo. One thing that has continually stood him out of the lot is his boyishly, handsome looks and undeniable acting skills.

Nouah was grew up on the streets of Ebute Metta, Lagos, where his Ondo-born mother lived, might not be staying too long on the screen if his plans work out.

Ramsey is already contemplating to leave the screen for a seat at the background, where he intends to show his expertise as a movie director.

"As an actor, I think I've gotten to a point where I'm satisfied with what I am and what I've become and been able to achieve.

"But as a director, no. I want to direct movies. I want to make impressions, like Mel Gibson did with Passion of The Christ.

He's an actor and now he's directing and he's a great director.

"I want to take a back seat soon and direct good movies that would stun Nigerians and people outside the country," he concluded.

"I wish that I could have my privacy back without the fame. I wish so. I don't know. Somehow, I'm not enjoying the life of stardom. And this is simply because you have no life. You live for the people. You live for everybody, nobody thinks about you. Nobody cares about you. They just want from you.

"Some people might enjoy it, I mean some of my colleagues might like it, but for me, it's not really rosy. I just wish I was an ordinary person. Maybe a businessman, a pilot, engineer, whatever; but one who does his work, gets his salary, has his family, and lives a normal life without the fame," the 36-year-old father said.

Maintaining that his passion for the arts, especially acting and singing, has kept him going in the industry. He said the industry is growing but still needs some attention as regards the technical aspect.

"The passion for what I do has kept me on the scene for this long and I love being in front of the camera and doing those things people and viewers love me for.

"However, the industry needs to be reformed and I'm talking about the technical aspect of the industry. We have talents and quite talented actors and actresses in the industry but we need those at the technical arm to step up the game because this actually tells much about what is viewed by the international communities," Ramsey stated.

An encounter with Ramsey isn't complete without the question about how he copes with the many ladies and obsessed fans, who are willing and would do anything to have him.

Speaking on his most challenging roles since his incursion into Nollywood in 1990, Ramsey said none could be as challenging as his role in the Tade Ogidan produced Dangerous Twins.

"So far, no movie role has been as challenging as my roles in Dangerous Twins. I still can't believe I scaled through the rigour and if you know Tade Ogidan very well, you'd know that he does his flicks to taste.

"I think it is still the most challenging because I have not gotten any challenging role like that. I mean, it is work playing a perfect role let alone playing two perfect roles in one flick and believe me, it wasn't easy but I am happy about the end product and I am happy I was the actor chosen," Ramsey said.

Unknown to many, before gaining prominence or even going into Nollywood, Ramsey had been a hip-hop singer working with other acts like Pat Attah, whom he was said to have brought into moviedom.

Little wonder, he performed brilliantly well in the music video of the compilation of songs done by stars for Tade Ogidan. He carried himself like one familiar with the microphone and he convinced many of his fans that he not only has the immense acting talent but he's also imbued with musical talent, which was once again brought to the fore by Tade Ogidan in the OGD All Stars.

How does he survive in the country if all he does is act without getting himself involved in any other business?