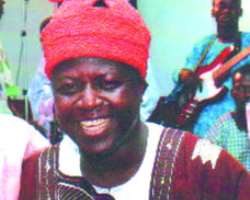 Gospel King, Evangelist Femi Opalemo, spoke with http://nollywoodgists.com about the controversy over who is king of gospel music, his new album, among other things

Q: Evangelist Femi Opalemo, what is happening to you now?

A: I have been working in my studio (Femopal Studio) on a new album. It is a double album.

Q: Why?
A: I am exercising my authority as the king of gospel music.

Q: Is it a medley or tracker album?
A: Everything about gospel.
Q: There is controversy surrounding your installation as the gospel king.

A: There is no controversy. I am the king of gospel. I was installed by those who installed King Wasiu Ayinde Mashal, K1 the Ultimate and those that crowned King Sunny Ade. They are WALPAM. So, my crown is authentic. Let's leave that alone for now. After the release of the album you will know what I am talking about.

Q: Of late, most gospels are changing. They now call themselves inspirational singers. Who is a gospel artiste?

A: A gospel artiste must be able to sing or record albums that will inspire people, be it juju, fuji and any brand of music, you must preach the gospel through it.

Q: Why are gospel artistes turning into inspirational singers?

A: Most of them are lazy and they do it because of the love of money. Our people cannot research into good music, but let's wait and see. We will separate the grain from the chaff. For example, King Sunny Ade, Ebenezer Obey and few other artistes sing gospel.

Q: Can you compare the era of Ayewa and others to this era?

Q: What has been your strength?
A: I have a good pattern of music which is uncommon. I have good stage craft among other things.

Q: Have you really made money from music?
A: No!
Q: Then why are you investing in it?
A: I am investing for tomorrow. I know that investing in God's Kingdom is not a loss. My God will return the money I have invested in thousands, even million fold.

Q: Can we say that marketers are killing gospel music?

A: Not really; marketers have their own faults vis a vis the artistes. Let's leave that for now.

Q: Since most gospel artistes are changing to inspiration singers, what happens to your music throne?

A: Let the album come out first then you will see what I mean. One of the tracks in the album is Ibi giga. I know that God is taking me to a higher place.

Q: A one time promoter of K1 wrote off your title, how will you react to this?

A: Is Bolaji Basia a musician? What does he know about gospel music? Let's leave him alone. He does not know what he is saying. If he wrote off my kingship, he is writing off that of his friend too. But I will not say more than that and I will not allow him put words into my mouth or abuse K1, he is my musical father.

Q: Did you pay money for the throne?
A: I did not pay a dime. If I paid for it on earth, can I pay for it in heaven? They believe I am qualified for it so I was given, so what else?