TRUST HAS BEEN THE ROCK OF OUR MARRIAGE------ZACK ORJI 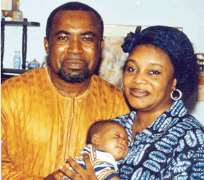 These lovely couples are shining examples to a lot of young celebrity couples. Though they did not meet in Nollywood, their relationship has blossomed to become one of the most talked about in Nollywood. Zack and Ngozi met in Enugu some years back when Ngozi was still a student at the Institute of Management and Technology. Ngozi also an actress has always been on the quiet side and one could easily see that air of friendship and love that radiates within the family anytime she is together with her hubby.

Apart from acting, the duo are also into music and are blessed with three children, Emeka Lionel Orji, Princess Laura Chiamaka and Michelle Chidimma Orji. Zack in an interview with a weekly magazine said that their marriage has survived because of their maturity and understanding adding, to the fact that they did not get married in Nollywood. He said trust has been the rock of their marriage and he has never felt jealous anytime she plays love roles because she is only doing her job. The same goes with Ngozi who says she doesn't feel jealous her hubby cuddling another woman in the movie.