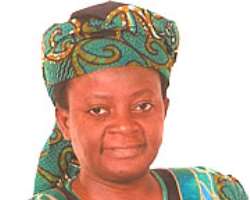 Dr. (Mrs) Foluke Ogunleye is the Festival Director, Ife International Film Festival and Head, Department of Dramatic Arts, Obafemi Awolowo University, Ile-Ife. In this interview with Adewale Oshodi, she speaks on the just-concluded second edition of the film festival and her plans for future editions. Excerpts:

You recently organised the second Ife International Film Festival, how easy or difficult was it planning for the event?

Planning for the festival was both easy and difficult. It was easy because I had lessons that I had learnt from the first edition of the festival. The experience served as a guide for planning the 2nd edition. I also had the backing and full support of gurus from the theatre and media industry during the planning stage. These include Prof. Akinwumi Isola, Prof. Femi Osofisan, Prof. Duro Oni and Dr. Hyginus Ekwuazi.

The Nigerian Film Corporation, headed by its Managing Director, Mr. Afolabi Adesanya was also there for me in a very big way. The festival could not have been the big success story that it was without logistic support from NFC. Where else would I have obtained the equipment and archival material? The NFC is doing a wonderful job and I think it deserves the full support of the Nigerian government to be able to do more.

It was difficult in the sense that Nigeria is not an easy place to operate in. Things that you would arrange by telephone or e-mail in developed countries would necessitate travelling by road in Nigeria. You can imagine going to Lagos from Ife, getting stuck on the expressway for hours. A trip you thought would take a couple of hours would stretch into a day or two days. This would mean a lot of unbudgeted expenditure, loss of man-hours, etc. Administrative work was also not easy. For instance, you want to type and print letters and there is no electricity. That certainly is frustrating!

The event, being one that attracted stakeholders in the film industry within and outside the country, would have gulped a lot of financial resources, how did you raise the funds?

You invited eminent scholars and practitioners in the film industry, especially those who came from outside the country, how difficult was it getting these people?

It was fairly easy to get the people because most of them are academic colleagues that I have been interacting with over the years. I had met many of them at film festivals, conferences and on some of my brief sojourns abroad. A few of them were only known to me through their academic repute, but they responded eagerly to my invitation because they had also become acquainted with me through my books and articles that had appeared on the international scene.

The most discouraging part of the interactions was the fact that some scholars politely told me that they had other programmes lined up for the period they were being invited for. This was their way of saying that they would not 'touch Nigeria with a ten foot pole'. One of the invitees asked me point blank for assurance that he would not be kidnapped by militants. Another foreign delegate told me that he had been warned not to sit in the front seat of any vehicle because of the high accident rate in Nigeria. It is quite painful to see the impression that many foreigners have about Nigeria – some erroneous and some not so erroneous.

I thank God that those who had the courage to come had a very nice time and one of the delegates from South Africa confessed that the experience revealed Nigeria to him in a very different light. I believe that the Ife International Film Festival is worthy of the Nigerian Government's attention because it possesses the potential of becoming a powerful tourist attraction, just like FESPACO in Burkina Faso.

In what ways would you say your students have benefitted from the festival, since it was hosted on the campus of the Obafemi Awolowo University, Ile-Ife?

My students benefited immensely from the experience in many ways. They were able to listen to lectures delivered by world renowned scholars and also had the opportunity to interact with them at a personal level. They were able to watch films that they might otherwise never have had the opportunity to see elsewhere. For instance the first feature film shot in Ghana, The Boy Kumasenu (1952) was brought to the festival. This is a film that they had only heard about in class. Moses Olaiya Adejumo (Baba Sala) also personally brought his film, Orun Mooru, to the festival.

Many of the students had never seen the film before. One of the students enthused after one of the film shows 'ah, I had never watched a film shot on celluloid before'. Actually, what thrilled him was seeing the projection process of the celluloid film and he was really overwhelmed. Students were able to interact with filmmakers from different parts of the world and in the near future, you will see some of them actually working together with many of these producers. As a matter of fact, members of the Independent Television Producers Association of Nigeria (ITPAN), led by the President, Mr. Busola Holloway, were visibly present at the festival.

Arrangements are in top gear for ITPAN to collaborate with the Department of Dramatic Arts at Obafemi Awolowo University as follows: Placement of interns with production houses during holidays, practical film training sessions with ITPAN members to be held at the University premises, assistance with donation of unused but functional equipment. This has brightened the students' vision and renewed their confidence that they have embarked upon a profession that will be profitable to them and their society. I am also building a powerful library of African films now. This will provide source materials for film lecturers from all higher institutions in Nigeria.

The film medium can indeed be used to perform a lot of miracles. You hear of people collapsing and dying in Nigeria these days, and it is because they do not leave any time for leisure activities. Arranging film shows in locations that are accessible to people would encourage people to go out and relax. We appeal to the government to make our society safe so that people can go to the theatre at night. The viewing experience in a group is not quite the same thing as viewing at home.

The first keynote speaker, Professor Manthia Diawara, Chair, Africana Studies Department, New York University, USA commented on this when Love Brewed in the African Pot produced by Ghanaian filmmaker, Kwaw Ansah, was showed at the festival. He was excited that the audience reacted verbally and showed their comprehension and appreciation of the films. It was quite a rewarding communal experience. It is also good therapy. Films can also be used to educate and inform at both formal and informal levels. Examples abound of the ways in which such things have been done in Nigeria and other parts of the world.

Some of the films entered for the festival include Alive and Well with HIV – Positive Living by Babajide Moronfolu and Asa ati Ise ni Ile Yoruba by Bukola Eluyera. These are films that can be described as both entertaining and educative. Film is also a medium that can unite nations. The second keynote speaker, award winning Ghanaian filmmaker, Kwaw Ansah, spoke extensively about the relationship between African nationalists, Nnamdi Azikiwe and Kwame Nkrumah and he concluded 'If only we would continue to share ideas among our peoples, as our predecessors had envisioned and practised, I believe Africa would be the better for it'.

What plans do you have for future editions of the Ife Film Festival. What do you think you want to do better next time?

I am already planning the 2010 edition of the festival, and by God's grace, it will be a very grand affair. I intend to bring participants from more countries than I did this year. Next year, I am also planning for more viewing centres so that we can show more films than we did this year. Next year, I will love to involve school children in a bigger way. They were around in large numbers this year, but they complained that they would rather not be mere observers, they wanted to be participants. Plans are now under way to organise school productions that will be featured in subsequent festivals. So far, the festival has not been award-based. Plans are also under way to introduce some awards during future editions, God willing.