I AM SO POSITIVE ABOUT NAIJA (NIGERIA)------KOFFI 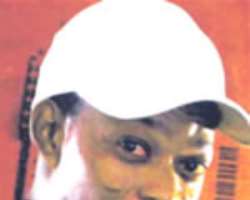 Koffi Idowu Nuel is a vastly talented entertainer, aside being a stand up comedian he is a broadcaster, musician , stage director and an actor. Born... to an Ijebu man from Ibeju Lekki in Lagos by a Togolese mother, over the years Koffi has carved a niche for himself as a performer to be reckoned with. He has won many awards, yet despite his fame and rising social status the stardom has not taken away his humility from him. Recently he discussed his life and carrier with ALLEN OLAJUWON. Excerpts.

You are a multi talented artiste, especially so in music and drama but in recent time you do more of stand up comedy, is this deliberate?

No, comedy pays my bill while music is another way to express who Koffi is.

What about live theatre?
I have not abandoned live theatre. It is not possible because that was where I started from, as a matter of my commitment to live theatre, I make sure I put up a stage play every year.

You just bought a new car, why did you decide to buy a Toyota Corolla instead of a high four-wheel drive which most celebrity now go for?

Bros, I never reach that level (laughs).
And the car does not have a customised registration number plate as some of your colleagues'?

I have so many important things to use money for rather than pay additional money for a car's plate number to bear my name .

But what is wrong with that, most of your colleagues do it?

That is them. I am different, our orientations differ.

Is that not an evidence that an artiste has 'arrived'?

Arrived? May be the day I begin to make millions daily like Dangote, I would have enough to flaunt around.On a more serious note, do we really need all that, with that we are encouraging more Area Boys on the street and armed robbers who will feel that you are an oppressor.

But people believe that you are a rich
Well I am rich in the Lord. Since people are assuming that I am rich that means money is coming let them continue to believe that. May be one day I go reach that level

Does that mean Koffi does not have a lot of money?
No, the little I have I keep investing it. And, glory be to God. I am comfortable at least, I am able to pay my bills.

What informs your simplicity?
I was brought up in a strict Christian way. And that has really helped me, over the years and by the grace of God, I don't intend to fall by the way.

Which of the cliques in the comedy entertainment sector do you belong to?

Cliques? Well, I don't know of any
But it is a general belief that there are three cliques in the industry?

Really ?
There are those comedians that are very close to Ali Baba, while some are too attached to Basket Mouth, and then the Julius group as well?

Well, I am hearing this for the first time. Anyway I don't belong to any clique. I am a friend to everybody. Name them, AY, Princess, Lepacious Bose, Omo Baba et cetera. I have featured in shows hosted by Basket Mouth and Julius and I featured Ali Baba in one of my album.

You are a celebrity, has that taken anything away from you?

No, I am still my normal self. I still keep most of my friends of 20 years ago. When we meet on facebook, some of them wonder how I still remember their childhood nicknames. I look for my old friends as well. I went to search for one of them recently he was so surprised that I could still find my way to his mother's place. The mum too was surprised and happy to see me. That is how it is supposed to be.

You rebranded yourself, promoting the white green white national colours, what informs this?

It is my own way of promoting this country. Whether we like it or not this is our country and to make it great is a task that must be done by everybody.

What has been the response of people towards this?
Very encouraging. When I started wearing green and white some people were like: 'what is the problem with this guy?' But thank God, more and more people are following the trend

It seems you believe so much in this country, despite the fact that some people tend to have their reserves?

I am so positive about Naija (Nigeria), that one day the country will be very great. And as you can see, things are changing gradually. If Oshodi, such a notorious black spot, could be transformed that means better days are coming. It is just a matter of time. We as citizens of this country just need to appreciate this country and make it proud of us. Hence we, too will be proud of it. That is just it. And for the first time, the price of petroleum was reduced.

Are you really a man from two countries? Do you make jokes in your mother's native Togolese language?

Bros, I no dey fluent for Togolese language o! And beside that, if I say a joke in Togolese who would understand what am saying?

Are you contemplating of hosting a show in Togo?
No, its not in my immediate plan except if I am invited to anchor a show or if the president want me to go there and make him laugh. Sure, I will go. I have not visited there before.Though my mother's parents are Togolese, she was born in Isale Eko, (Lagos). Lafiaji to be precise.

You studied Chemistry in the university but you are not practicing, are you fulfilled doing what you are doing?

Yes, I am happy doing what I am doing. The money is not really coming in as expected but one is still grateful to God.

If you are not a comedian, musician or theatre artiste, what other trade would you have loved to do?

Teaching
Why?
It's a profession I love with deep passion.
Are you still going to practice that?
Yes.
When?
At the appropriate time
What is your view about the entertainment industry in Nigeria?

We are growing, but we need to do more. We comedians, need to work on branding ourselves and do more of endorsements. That is another avenue through which we can make some money, aside comedy. I am optimistic that the comedy industry is going places. It was not like this years back .

Some of your collogues have those who they mentor, do you have people learning under you?

No,
Why?
Because you cant teach somebody how to crack jokes if he or she does not have the ability to do so. However, what I do is that I encourage some of the guys around me. I give them opportunities to showcase their talents at my shows, and they are catching up.

How have you been able to stay away from scandal?
Because I will not do scandalous things, I don't waka anyhow. If I am not on stage, I am in my studio working or reading. And don't forget, I am a family man.

How did you meet your wife?
That is my angel, Kofoworola! We were friends for some years at the University of Lagos (UNILAG) before we got married last year, she is a wonderful wife. Kofo has contributed immensely to my life and carrier. I am happy and grateful to God for bringing her my way.

You had a show in Ibadan recently, how was the show?

It was a wonderful experience. And I am greatful to everybody who took part to make it happen.

What are your plans for the future?
I want to be where God wants me to be and to be a role model to my genereation.