Is this Nkiru Sylvanus latest catch? 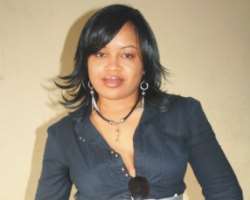 NOLLYWOOD Nkiru Slyvanus is one actress whose private life has been guided jealously but the way she was seen holding tightly to entertainment journalist, Patrick Uwalaka during the recently held National Association of Movie Journalist (NAMOJ) award night after party was so close for comfort that many started asking if the duo had something going on for them.