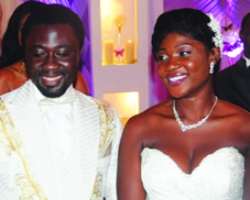 •The couple at their wedding yesterday
For star actress, Mercy Johnson, Friday was a true testimony that love conquers all as she got married to her heartthrob in a colourful traditional ceremony.

The traditional marriage which started hours after the scheduled time of 11am moved into full swing as veteran MC and entertainer, Madam Kofo ushered in the royal family of Okojie led by the king and father of the groom, Chief Okojie.

After the rite of paying homage to the family, letters were exchanged and  dowry paid. The newly wedded couple cut the cake and danced to the delight of many.

The bride who was all smiles expressed her happiness thus,'I am very happy for this day. It is a leap of faith for me and I believe God will be with me. I thank all those that stood by me, my family, friends and team. Today shows that love has triumphed' .

Madam Kofo was the MC for the traditional event while comedian AY, is the MC  for the white wedding. Tricia Esiegbe, Muma Gee, Femi Ogedengbe, Solo Amaco and others represented the Nollywood constituency.

The wedding ceremony started at Christ Embassy headquarters, Oregun Road, Lagos, with Pastor Tom as officiating minister. The wedding train then moved to 10 Degrees, venue of the reception after presentation of the wedding certificate. The man of God, who presented the certificate on behalf of Pastor Chris Oyakilome, admonished the couple to allow love to reign supreme.

AY, the comedian, ushered in the couple at the reception. After a brief prayer from a family member, the party went into full swing. DJ Jimmy Jatt was behind the wheel of steel, while Godbless Band and Navy Band provided live music.