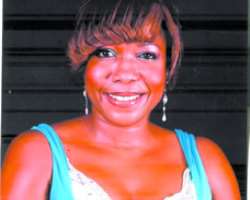 Just when it was thought that Kenny Saint Brown is down and out because of her break up with her husband and the not-too-impressive last album, she reemerged on the music scene with a bang. At the moment, her song, 'Turn Around' is the most played on radio KSB, as she is fondly called, told us unequivocally that she is back for better and really 'banging'.

How come you are in studio this early morning? Most women are in front of their mirror applying make-up?

I'm not a woman, I'm an artiste. When there is inspiration I'm in the studio but when there is none I spend a lot of time in front of the mirror. Inspiration to do new songs is keeping me awake in the night. So first thing in the morning I'm out of bed.

The songs I just heard now (Turn Around, Merry up, Abanikonda and Moti Goke, Moti so) are very powerful and inspirational. No doubt they will rock the airwave. Why did it take you so long to come up with something this powerful?

Actually, this is my eleven years doing music, it took me experiencing some pitfalls, some shame, and setbacks that have drown some female artistes for me to come this far. Those things didn't drown me, they became higher ground for a new me to emerge. I passed through some situations that are now giving me the kind of inspiration to write the kind of songs I am now doing. While I was going through those situations I couldn't have written these songs because I didn't have the experience. These songs came out of personal experience.

You know when I say something like 'Turn Around' it means I am telling God that since situation brought me this low please turn me around. Moti Goke Moti So means that you this naughty situation I have overcome you. A person who has not gone through anything cannot say I overcome. At the same time joy brought me back from the experiences I went through. The bible says the joy of the lord is my strength. If anything happens to you and it does not touch your joy you are intact. So I am saying instead of theses situation killing me I am going to be joyous by being merry, so that gave birth to 'Merry Up.' So those are the things we are talking about.

How many tracks should we be expecting?
I wouldn't want to say a particular number of tracks. The people I'm working with are enthusiastic about the job. For instance, I came into the studio and found out that Terry G had produced another beat and he insisted that I must use the beat that was how we came about Moti Goke Moti So. I told ID Cabbassa to do one song and now he is doing three. That is the kind of enthusiasm the people I'm working with have for me and this job. So, I can't say what the tracks would be.

How many artistes are working with you on this?
In Turn Me Around, I already featured Sheyman and Dagreen. In Merry Up I am featuring MI and in Moti Goke Moti So I am featuring Terry G. I will be featuring ID Cabbassa in Abanikonda. We are still working on the album, by the end I will be able to say how many people we will have on it.

You seem to be have infusion of vernacular more than you had in your last album.

Yes, that is the mood the Nigeria music industry is now. Now, there must be element of the street in every song. The street must be able to identify with the songs.

Since you are singing gospel, does that not take away Christ out of the gospel?

What is gospel? Gospel is good news. For instance, I am saying Merry Up that is one good news everybody needs to hear now considering the bad economy we are all in now. Gospel is about telling people the good news. God is bored with us doing gospel the way it used to be. We are supposed to take good news out to the world instead of leaving them to be feeding on messages of sex, drugs, alcohol and the likes. We need to get street-wise with the gospel, and it is the street that needs it the most. There is a shift in the Nigeria music industry and that shift dictates that there must be an element of the street in your songs. Any good music that can inspire is gospel.

When are you releasing this album?
It will be before Easter definitely. But before then we will have the video of Turn Around on air.

Where are you shooting the video?
It will definitely not be South Africa. It will be a surprise package. Who says we can't go on water? Let's keep our fingers cross. But we will be shooting here definitely.

So, KSB is back for good.
Yes, I am back and banging.
The “Moti Goke, Moti So” implies that you have overcome, when did you realize that you have finally overcome?

The fact that I could write songs says a lot. Take a look at Whitney Houston; she is totally down though not yet out. What brought her down? Her choice of marriage, the marriage, and the habit she picked up in the marriage and the break up. Those four things kill female artistes faster. Marriage, motherhood, bad press and a whole lot of other things nearly ruined me. There was a time I was taking my children to perform with me. The break up did not ruin me and the bad press was really bad still did not break me. Those things would have drowned me yet I emerged strong. That in itself is a big victory.

That means life is not easy being a female artiste.

Life is not easy being alive and being a female artiste means you have to work triple. Most times female artistes marry their managers and that in itself is another issue. Two years ago I had a meeting with up and coming female artistes and three of them that were married to their managers had broken up. They hated me for telling them the truth and one of them went to report me to my brother, Kenny Ogungbe and he told me to apologise and I did. Those are things female artistes take on themselves. Again, marrying an artiste is a hard thing to do because you both have your demons. These are things that should work against me but here I am back and better like an angry lion.

You'll definitely still be with Kennis.
Oh yes but we are going to be working a lot with marketers because this is a restless KSB. Now, there is nothing holding me down because I have good works. Definitely, Kennis Music will be the umbrella which will make lot of things happen.

Will you get marry again?
Yes, but not now. Marriage is a good thing to do if you have the right partner.

What does love means to you?
Love is sacrifice. Love is give and take if you keep giving and you don't receive it will die.

Do you agree with those who say love is a living thing?

Yes, you have to feed it to make it live. Love need to give in term of carbon dioxide and receive in form of oxygen. Marriages break when it is only one side that keeps giving. Both parties must be willing to make it work.

Is it true Eddy is trying to make a comeback?
Forget that one, it is not true.
In the last two years of the separation have you dated anyone?

No, I haven't.
Ok, has any water passed under the bridge?
No, not at all (laughter). I have stayed off men.
By SAMUEL OLATUNJI