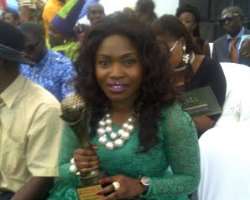 Nollywood actress, Halima Abubakar, was two Sundays ago declared Actress of The Year by organizers of the annual City People Award. The pretty actress and part-time Entrepreneur who is a graduate of Sociology of the Bayero University, Kano ran over top contenders like Ini Edo, Monalisa Chinda and Tonto Dike to emerge Nigeria's leading actress for 2011 in a competition that was fiercely contested and decided by votes from fans. A native of Obangede in Kogi State, Halima has, with that feat and the Global Leadership award for acting which she received prior to the City People award, earned her full acting pips. 'I feel really honoured for the award which is the seventh I have received since I started out eleven years ago' she said with girlish joy.

Congratulations on your winning first the Global Leadership award as Best Actress and then the City People's Award. This obviously is the right icing on your acting cake…

Yes indeed it is. And I thank God for the awards and the others I won in the past. I consider it an honour and privilege to be recognized. I feel great. This just means that I have been accepted as an actress and this is just telling me to brace up for more challenges. To be chosen out of those equally good actresses' means a great deal to me, so I will be forever grateful to my fans and the organizers of the award. I mean when I heard that I had won, it was shocking because the competition was really stiff. But at the end of the day, the fans chose who they wanted. That is why I dedicated the award first to my fans and then I called everybody that has touched my life -— fans, family, media and even colleagues. For me, this is just the beginning of greater things that will happen to me.

Coming also months after you lost so much of your investment in the Kano riot, do You feel compensated somehow?

Well you could say God has decided to cheer me up with the awards. But basically, we grew up in Kano and everybody knew about the business and what we lost, so it was kind of shocking that it happened. But I consider the whole incident a wakeup call for the whole family to move on. I am not going to say that the incident was intentional. It was not intentional. Anyway, I thank God that we have something better and bigger now.

So how has it been for you generally and did you think from the start of your career that you would travel this far?

Sincerely I didn't know. But as you can see, I am having fun and am enjoying it. If not, I would have quit and not waste 11 years of my life doing what I don't enjoy. True, I tried my hands on modelling and that was in the past and it was not a serious thing, but I have been involved in small private businesses right from day one. I used to buy things to sell right from when I was young. It was something that I started quite early in life. But it has been good so far.

Now, how do your parents and family members react to some of the daring roles you play in movies?

Well they know that that is what I am paid to do. Most of the time, I give them the films to watch even when there are one or two embarrassing scenes; they know it is the job. I mean they appreciate the fact that it is make-believe and that I am not the same person off set.

Now of the over 100 jobs you have done, which is the most tasking?

I have a couple of memorable works. For instance, I just finished shooting a movie in Enugu which kept me on location for almost a month. The movie is titled 'Kiss on the Royal Balcony'. I played a double in the movie. I acted a good part and a terrible part. It was intense. I had over 80 scenes. Thank God we finished that job because there was no moment of rest. I was working round the clock. This movie and countless others I have done that are at various stages of post production will blow minds when they are released.

Is the way up the acting ladder in Nollywood smooth? Some people say it is smooth?

No, it is not smooth at all. I am living testimony that it is not smooth at all. Eleven years in one job, Haba! A banker would have become a managing director by now or something. Like everything in life, nothing good comes easy. But even at that, I don't think I will quit acting and I say this because I find acting and my involvement in showbiz fulfilling. It may not be so rewarding financially, but it is fulfilling. I enjoy what I am doing. I want to even do more in future like providing the platform for others to air their talents and become something in life. I like to become an executive producer in future. I want to get to a level where I will work at my own pace. And of course I write. I have written a lot of stories that have been screen- played. We should start working on them soon. I also want to, in future, spread enough joy and love around in my own little way. What is important is giving out sincerely from the heart and that informed my going out to feed the poor and to visit the less privileged during my last birthday commemoration in June.

And then these lustful fans who express love to you openly even on face book? How do you handle them?

I love all my fans and it is crazy sometimes the way they react. There is no word to describe my gratitude to them for their support. I am as nice as I can be and can be tough too but most of the time, I am always nice. When they sound crazy, I simply tell them off nicely so they don't get hurt. But I want to say to all my fans that I feel special and accepted by them and I am very grateful. But that is where it ends.

How much money do you spend on your looks?

I don't spend much looking good. The only thing I spend money on is perfume because I have a mini business where I sell perfume. I love perfumes and I love books. I love reading too. I read inspirational titles. I generally love acquiring knowledge. I also like my peace. I don't like anything troubling my peace. I don't like haters, people that just criticize people for no reason. I also hate people who pass judgment on you based on gossip and hearsay and people who love to stand in other people's way. I just know that people like that will crash someday.

Well that's my private life actually but I am in a relationship as every matured girl should be. I don't think I am a child anymore. At least now, I know what is good for me. Marriage will come when it will come. I don't think anybody should pressurize anybody to get married. Truth is that marriage lasts as long as you want it to last and I want my marriage to last forever.