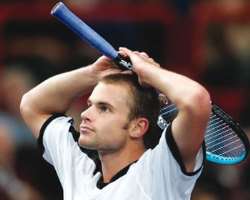 Andy Roddick
A testy Andy Roddick was upset by Germany's Philipp Kohlschreiber 6-7 (5), 7-5, 6-1 Monday in the first round of the Western & Southern Open, a key warmup for the U.S. Open.

The 11th-seeded Roddick received a warning from the chair umpire for flinging his racket to the court after losing the second set.

Then, after double-faulting in the second game of the third set to fall behind 30-40, he smacked a ball high into the stands, which prompted chair umpire Carlos Bernardes to give him a point penalty that put him behind 2-0 in the set.