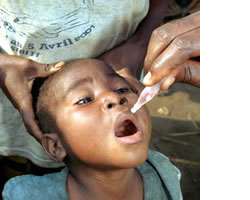 
Polio could be wiped out in Nigeria - one of the world's last blackspots of the disease - thanks to an improved vaccine, research suggests.

They say it could eradicate type 1 polio - the most common form - in Nigeria if it reaches enough children.

The study appears in the New England Journal of Medicine.

Nigeria is one of only four countries in the world where polio has yet to be eliminated, and 82% of global cases reported so far this year have been in the country.

Polio is highly infectious and it primarily affects children under five years of age. A small minority of infected people develop permanent paralysis, which can be fatal.

The monovalent oral poliovirus vaccine, known as mOPV1, has been used in Nigeria since February 2006 and the number of reported cases of polio in the country fell by 75% between 2006 and 2007.

The latest study shows that just one dose of mOPV1 gives a child in Nigeria a 67% chance of being protected, compared with a 16% chance after receiving the standard trivalent vaccine.

However, the researchers warn that although the monovalent vaccine is proving very effective, many more children need to be immunised if the polio virus is to be eliminated in Nigeria.

In the north west zone of the country, where the majority of new cases are found, 21% of children report never having received a single dose of the vaccine and a further 55% have received fewer than the recommended four doses.

Earlier this year the World Health Assembly expressed alarm over a dramatic increase in type 1 cases in Nigeria because of poor immunisation in the north of the country.

The Nigerian government subsequently established a presidential taskforce to identify barriers to immunisation, and potential solutions.

Researcher Helen Jenkins, based at Imperial's MRC Centre for Outbreak Analysis and Modelling, said: "Nigeria and India are responsible for the vast majority of new global polio cases.

"In Nigeria, we now have an effective vaccine to use and we've seen the start of improvements in vaccine uptake.

"These last pockets of unvaccinated children now need to be reached to achieve elimination in Nigeria and this in turn will have a dramatic impact on the prospects of worldwide eradication."

In a statement the World Health Organization said the study proved the new vaccine was a "highly effective tool" - but operational problems stood in the way of successfully eradicating polio.

"To overcome the remaining operational challenges, full political oversight and engagement at all levels is necessary, as demonstrated by states such as Kebbi, where case numbers have declined following such engagement."

The researchers reached their conclusions after analysing the vaccination histories of 21,815 children with acute flaccid paralysis, 14% of whom had polio, collected between January 2001 and December 2007.