P-SQUARE INVASION ALBUM SELLS OVER A MILLION IN FOUR DAYS 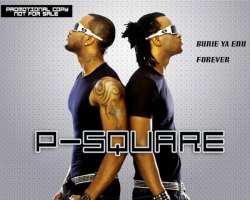 The fun fair that greeted the release of the latest album of the leading Nigerian singing twins Peter and Paul Okoye,popularly known as P-Square, may not have died down fully but the latest story about the album which is being marketed by three of the largest marketers from Alaba axis,is that the album is a total sell out.

Though the new musical cd titled Invasion, was released to the marketers on Monday, they did not start selling it until Wednesday and between that Wednesday and Saturday, it sold over one million copies.

It was revealed that the cd has been reprinted about three times since that Monday by the marketers.

It would be recall the duo's album became public knowledge with the Invasion Concert which was held at the prestigious Expo Hall of Eko Hotels and the rate at which the album is moving off the shelve may make the album their best selling if it continues.