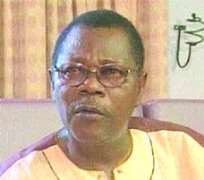 This is not a true life story. It is a new movie in the works.

In the said film, the late humorous star actor, is a successful rich man with wives and numerous children.

But things and journey of life began to nose alive for this father of many when he was hit by a strange illness which no doctor or spiritualist has been able to cure.

But unknown to them, even if their father dies, all they have been dreaming will become theirs have since been used to settle their fathers debts to his numerous business partners.

This humor flick was shot somewhere in Okokomaiko of Lagos and is expected to hit the market shelves next week.