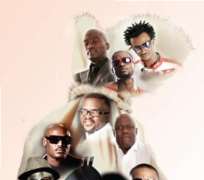 Sir Shina Peters
Sir Shina Peters made it big with the success of his mega hit album titled 'ACE', which was released about 23 years ago on Sony Music label. SSP, as he's fondly called, built a multi-million naira mansion at Iju, on the outskirts of Lagos. Although, it's widely speculated that SSP no longer enjoys high patronage for social gigs , it's reliably gathered that he still collects millions of naira before hitting the stage for any of his great performances. SSP is into shares, landed properties and has connections with a lot of Nigerian money bags. Among his fleet of cars are Acura legend, Limousine, Toureg Sports Utility Van (SUV) and other wonders- on-wheels.

Basket Mouth
Bright Akpocha, the famous humour merchant, known as Basket Mouth is one of the most sought after stand-up comedians of his generation. Aside collecting fat cheques before going on stage for one of his numerous performances, most of his successful personal shows have left the rugged looking star with big bank accounts. Basket Mouth, who lives in his multimillion naira mansion in Lekki, Lagos, is learnt to have built a house for his parents, have a personal house in their home town and loves to invest in shares and properties. Benz C class 2006 model, Toyota jeep, Grand Cherokee Jeep are some of the expensive rides, which he has been cruising with.

P-Square
Their debut album 'Last Night', which was released on Timbuktu record label, was like a tip of the iceberg. But the mysterious singing twins have it all squared in the Nigeria music industry with their monster hit album titled 'Get Squared' that was certified double platinum barely a year it was released. The remix version of their chart buster track 'Busy Body', which also sold several millions of copies was another icing on P-Square's cake. With landed properties in Jos, Port Harcourt and their new Lagos mansion worth N400 million, it's no doubt that the dynamic duo are in the millionaires club. The P-Square duo have two Sequoia Sports Utility Vans (SUVs), one hummer SUV, truck bus, Toyota Aultima among other automobile, which litter their garage.

Abass Akande Obesere
Omorapala, as fondly called, is said to have ventured into oil business, though, unknown to many, SS scooped that the repentant king of lewd music also invested in real estate and hotel businesses. Obesere, owns a mansion worth millions of naira in Magodo, and has already moved into another masterpiece in Okota Lagos State, very close to K-1 Ultimate's house. The official crowned 'Paramount King of Fuji', being another car freak, has two Lexus SUVs, Toyota Land Cruiser, CLK Mercedes Benz among other expensive cars.

2Face
The success of 2Baba's, as he's fondly called, solo debut album titled 'Face 2 Face', which contained the hit track 'African Queen', sold several millions of copies, and it was what the first Nigerian artiste to win MTV base Europe award, needed to leave the lower rung of the ladder to the upper place reserved for the best. While many people thought 2face was going down, his recent deal with Airtel left him several millions of naira richer. It was learnt that 2Face have been investing his money on shares, landed properties both in Lagos and his home town, Otukpo, Benue State. He drives Armada SUV, Range Rover and End of Discussion type of Toyota brand of car.

Saheed Osupa
The controversial king of music is unarguably the hottest Fuji artiste at the moment. This explains the reason behind the sudden jump of Saheed's performance fee per show, from N600,000 to one million naira. Apart from his multi million naira house in Ibadan, which some people said he built for his late mother, another one is nearing completion at the Ajao Estate of Lagos while SS also scooped that he built houses for his wives and has another uncompleted building and some virgin lands in Ikorodu, also in Lagos.

D'banj
Although, many of his detractors would probably fault the inclusion of the Koko Master, D'banj in the list of Nigeria's showbiz money bags, several projects, which the he has committed several millions of naira into, speak volumes of his affluence. Apart from investing in shares, landed properties, hospitality business among others, D'banj, we reliably gathered, is making millions of naira for brands endorsement, appearances in private gigs and big concerts home and abroad. Apart from being a powerful dresser, D'banj is an auto freak. He drives Prado jeep, Land Cruiser and a Bentley.

Ke-Ke- And D-One
The duo of Kehinde Ogungbe a.k.a. Ke-Ke and Dayo Adeneye a.k.a D-One command power, money and respect in the showbiz world. The acclaimed world famous started experiencing a phenomenal rise to fame and fortune since they quit their popular programme 'AIT Jamz', to float an entertainment outfit called Primetime Entertainment and a record label known as 'Kennis Music'. The brothers from different mothers are fire brands, who know how to make money through showbiz . They drive posh cars, live in multimillion naira mansions and invest greatly in shares and landed properties.

Adewale Ayuba
This is another young chap in the Fuji music scene who has been proving his worth. Mr. Johnson owns a twin duplex on Adewale Ayuba Way, Mende in Maryland, Lagos, Nigeria, and another one in Victoria Island, London plus a modest building in Thanes Island, also in London. The 'Bonsue King' is an auto freak to the core, on the list of his many cars are C Class Benz, Honda SUV among other posh rides and landed properties in some part of Lagos state.

Julius Agwu
Julius 'De Genius' Agwu, as fondly called by his friends and fans, has endeared himself to many Nigerians especially women, due to his sense of humor. The diminutive stand-up act's trendy lifestyle and unusual carriage make up for what he lacks in height and physique. Julius De Genius, makes a chunk of his money from his show and appearances at events. He owns choice properties in Lagos and Port Harcourt, a multi- million naira studio in Surulere, Lagos. He has Rav- 4 SUV, Prado and other cars.