GHANAIAN CELEBRITIES WITH TATTOOS WILL GO TO HELL”MARTHA 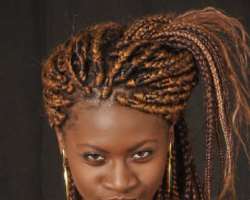 Just because society approves of something does not make it right in Gods eyes. Our society at large also approves of abortion and divorce. However, the bible makes it clear that God doesn't approve of these things.

Beautiful and enterprising Actress, Martha Ankomah in an interview revealed to us that tattooing is a bad practice which is against the bible.

This revelation was made known to this writer after he had asked why she was not going into Tattooing with such fresh body of hers. She made it known to us that she is not tattooing because the bible has made it clear that anyone who tattoos is a sinner.

Although she did not get the bible quotation correct after she had mentioned it, we found the text somewhere in revelations. We tried doing a few research into the bible and we have another text to share with our readers “Leviticus 19; 28” and it reads;” Do not cut your bodies for the dead or put tattoo marks on yourselves .I am the Lord.”